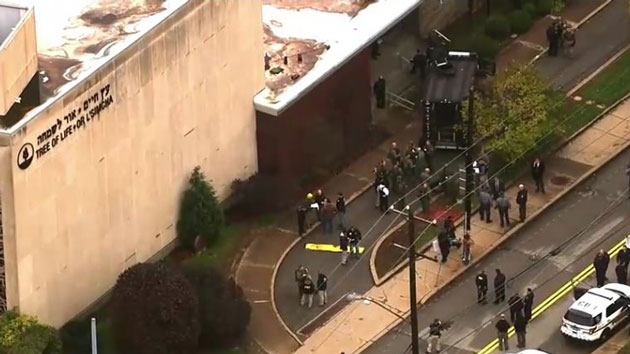 ABC News(PITTSBURGH) — The man who allegedly gunned down 11 worshipers at a Pittsburgh synagogue used three handguns and an AR-15 assault rifle in the 20-minute killing rampage and screamed to SWAT officers who wounded him in a shootout that he wanted "all Jews to die," authorities said on Sunday.
Robert Gregory Bowers, the suspect in the latest mass shooting in America, allegedly acted alone in the Saturday morning massacre at the Tree of Life temple, bursting into Shabbat services with guns blazing and killing three women and eight men, while injuring six others, including four police officer, officials said.
During a news conference Sunday morning, the names of the dead were released. They ranged in age from 54 to 97, and included two brothers and a married couple. All the victims were from the Pittsburgh area.
Dr. Karl Williams, the Allegany County medical examiner, read the names of the victims: Joyce Feinberg, 75, Richard Gottfried, 65, Rose Mallinger, 97, Jerry Rabinowitz, 66, Daniel Stein, 71, Melvin Wax, 88, and Irving Younger, 69.
Also killed were brothers Cecil Rosenthal, 59, and David Rosenthal, 54; and Bernice Simon, 84, and her husband, Sylvan Simon, 86.
Bowers, 46, of Pittsburgh, remained in fair condition and under guard on Sunday in a Pittsburgh hospital. He is scheduled to make his first appearance in federal court at 1:30 p.m. on Monday.
Investigators said that minutes before carrying out the carnage, Bowers is believed to have posted his intent to commit the massacre on the social media platform Gab, which is popular with white supremacists and the alt-right.
"Screw the optics, I'm going in," reads a post believed to have been made by Bowers moments before the first gunshots were fired inside the temple.
Bowers was charged late Saturday night with 29 federal counts, including several hate crimes. He is facing 11 counts of obstruction of exercise of religious beliefs resulting in death, 11 counts of use of a firearm to commit murder, four counts of obstruction of exercise of religious belief resulting in bodily injury to a public safety officer and three counts of use and discharge of a firearm during and in relation to a crime of violence.
The four counts of bodily injury to a public safety officer stem from the police officers injured in the shooting.
"Each count is punishable by death," Scott Brady, the U.S. Attorney for the Western District of Pennsylvania said at Sunday's news conference.
Bob Jones, the special agent in charge of the FBI Pittsburgh office, said Bowers allegedly used three Glock 357 handguns and an AR-15 assault rifle in the massacre.
"All the weapons he brought into the facility were used," Jones said.
Brady added that during the course of the deadly assault, "Bowers made statements regarding genocide and his desire to kill Jewish people."
Jones said Bowers roamed the sprawling temple in Pittsburgh's Squirrel Hill neighborhood to kill victims.
Three services were occurring simultaneously at the temple at the time of the rampage and Jones said bodies were found in three different locations of the synagogue.
The first shots were fired about 9:45 a.m. and calls went out to emergency medical services at 9:54 p.m.
Officers raced to the scene and encountered Bowers as he was exiting synagogue and gunbattle ensued, authorities said. Bowers retreated back into the temple and went to the third floor, according to the criminal complaint filed against him.
"SWAT operators entered the third floor of the building. While searching for any remaining victims SWAT operators encountered Bowers, who opened fire on the officers," according to the complaint.
During the gunfight, two officers were shot multiple times by Bowers. Two other officers were injured by flying glass or bullet fragments in the encounter, authorities said.
During the exchange of gunfire, Bowers was shot several times and taken into custody, according to the complaint.
As Bowers was being treated at the scene, he blurted out a statement to SWAT Officer David Blahut, saying, "He wanted all Jews to die and also that they (Jews) were committing genocide to his people," according to the criminal complaint.
Bowers was not known to the FBI before Saturday, according to Jones. Investigators suspect he acted alone, Jones said.
In addition to the federal charges, Bowers was also charged with 35 state offenses, including 11 counts of criminal homicide, six counts of criminal attempted homicide, six counts of aggravated assault and 13 counts of ethnic intimidation.
Some of the congregants were attending a baby-naming ceremony in the synagogue. No children among those injured, authorities said.
Jennifer Paddy said her daughter, who was staying at a friend's house near the synagogue, "heard rapid gunfire."
"Her and her friend … they ran downstairs and barricaded themselves in the basement," she told ABC affiliate WTAE in Pittsburgh.
The Anti-Defamation League said it was "unconscionable for Jews to be targeted during worship on a Sabbath morning."
"This is the deadliest attack on the Jewish community in the history of the United States," it said in a statement.
First responders prevented the shooting from becoming a worse tragedy, Brady said.
"They are truly heroes, who without hesitation, without concern for their safety ran toward gunfire to protect innocent victims. By confronting and neutralizing Bowers, they prevented additional loss of life," Brady said.