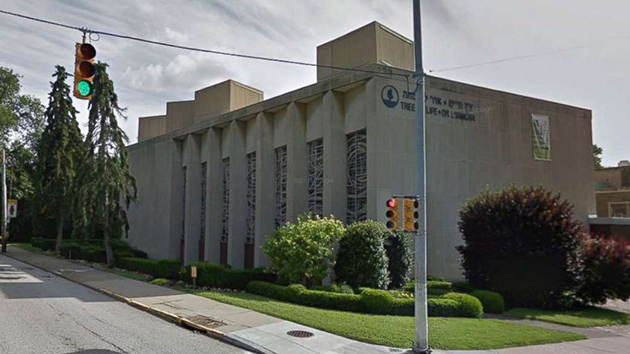 Google Street View, 2018(PITTSBURGH) — A suspect is in custody after multiple people were killed and three officers were shot at a Pittsburgh synagogue, authorities said.
Police responded to reports of active gunfire at the Tree of Life*Or L’Simcha congregation, according to Pittsburgh Public Safety commander Jason Lando.
It is "imperative" that people in the area shelter in place, Lando added.
The synagogue is a conservative Jewish congregation, according to its website, and there was a morning Shabbat service scheduled from 9:45 a.m. to 12 noon today.
President Donald Trump tweeted that he was "watching the events unfolding in Pittsburgh, Pennsylvania" and urged people in the area to "remain sheltered."
The Pittsburgh Department of Public Safety asked people to avoid the area of Wilkins Avenue and Shady Avenue Saturday morning.
Pennsylvania Gov. Tom Wolf also urged people to "stay away from the area and keep the congregants and law enforcement in your prayers."
Agents from the Bureau of Alcohol, Tobacco and Firearms are also responding to the scene.
The New York City Police Department said it is deploying extra teams to synagogues and Jewish locations throughout the city.
Copyright © 2018, ABC Radio. All rights reserved.