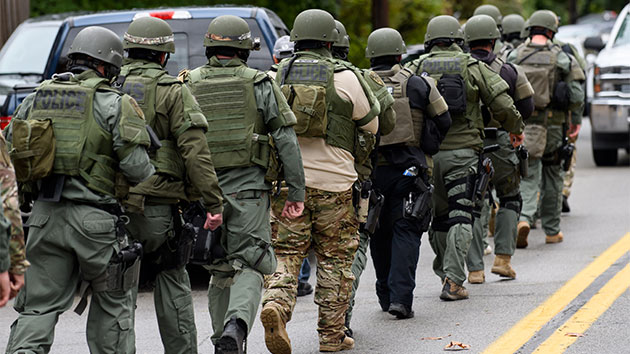 Jeff Swensen/Getty Images(PITTSBURGH) — The man who allegedly opened fire on worshippers at a Pittsburgh synagogue in what is likely the deadliest attack on the Jewish community in U.S. history acted alone, authorities said.

Eleven people were killed and six more were injured, including four police officers, when authorities say the suspect opened fire at the Tree of Life*Or L’Simcha congregation in the Squirrel Hill neighborhood of Pittsburgh. An assault rifle and three handguns were found on the suspect, Bob Jones, FBI Pittsburgh special agent in charge, said during a press conference Saturday afternoon.

The suspect has been identified Robert Bowers, who is 46 years old. Bowers has several firearms and hunting licenses registered in his name and has addresses in the Pittsburgh area.

"This is the most horrific crime scene I've ever seen," Jones said.

"The suspect's full motive is unknown but we believe he was acting alone," Jones added.

The Anti-Defamation League condemned the attack in a statement, saying it was "unconscionable for Jews to be targeted during worship on a Sabbath morning."

"This is the deadliest attack on the Jewish community in the history of the United States," the ADL said in a statement.

The suspect is in fair condition with multiple gunshot wounds at a local hospital after being taken into custody, Pittsburgh Public Safety Director Wendell Hissrich told reporters during the press conference Saturday afternoon.

At 9:54 a.m. Saturday, police received reports of an active shooter at Tree of Life, where a service was taking place, Hissrich said.

There was also a morning Shabbat service scheduled from 9:45 a.m. to noon, according to the synagogue's website.

After entering the church, Bowers allegedly killed at least 11 people, Jones said, and exchanged fire with officers, some of whom were injured. Bowers was also shot.

He was taken into custody and brought to the hospital, Hissrich said.

Bowers had not been charged as of Saturday afternoon.

Law enforcement is looking closely at a social media account believed to be linked to the suspect. A counterterrorism official briefed on the probe says they are looking at Bowers' social media profiles, looking at what he allegedly posted and his conversations.

Since the incident happened at a synagogue, it is being treated as a federal hate crime and will be handled by the Federal Bureau of Investigation (FBI) with the assistance of local, county and state police, he added.

Upon arriving in Indiana for a speech before the Future Farmers of America, President Donald Trump called the attack an "anti-Semitic crime."

"This wicked act of mass murder is pure evil, hard to believe, and frankly something that is unimaginable," Trump said at the start of the event. "Our nation and the world are shocked and stunned by the grief. This was an anti-Semitic act. You wouldn't think this would be possible in this day and age but we don't seem to learn from the past."

"The vile, hate-filled poison of anti-Semitism must be condemned anywhere and everywhere it appears," he added.

Speaking to reporters before boarding his flight to Indiana earlier in the day, Trump called the suspected shooter "a wacko" and a "maniac." He also said the suspect should "pay the ultimate price" and be subjected to the death penalty.