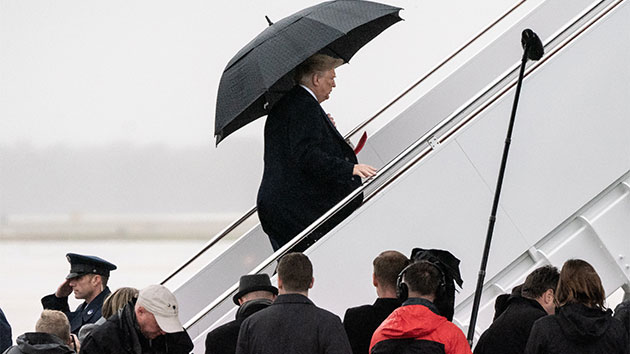 Ken Cedeno-Pool/Getty Images(WASHINGTON) — Just hours after a mass shooting at a Pittsburgh synagogue claimed the lives of at least eight people and wounded six others, President Donald Trump expressed his desire for swift capital punishment for the suspect and renewed his calls for armed guards at houses of worship.

"Anybody that does a thing like this where innocent people that are in temple or in church — we’ve had so many incidents with churches. They should suffer the ultimate price," Trump told reporters before boarding Air Force One. "They should pay the ultimate price. I’ve felt that way for a long time. Some people disagree with me. I can’t imagine why. But this has to stop."

Police responded this morning to reports of active gunfire at the Tree of Life*Or L’Simcha congregation, where a service as taking place, officials said. The suspect is in custody and has been taken to the hospital, according to authorities, and the incident is being investigated by the FBI as a federal hate crime.

Trump focused on the death penalty and the need for armed guards to protect worshippers.

"When people do this, they should get the death penalty," he said. "They shouldn’t have to wait years and years. Now the lawyers will get involved. Everybody’s going to get involved and we’ll be 10 years down the line."

But after arriving in Indiana, where he is slated to speak before the Future Farmers of America, Trump called the shooting an "anti-Semitic crime."

He also said he had spoken to the mayor of Pittsburgh, the governor of Pennsylvania and his daughter and son-in-law, who are both Jewish, while aboard Air Force One. Trump said he is considering canceling his rally in Illinois later tonight.

Trump went on to call for more armed guards at places of worship to protect congregants.

Trump emphasized that the suspect in the shooting should get the death penalty. He also described the differences of facing a mass shooting as a civilian and as the president.

"You know, before I ran for office I watched incidences like this with churches and other things. I’d say, 'What a shame. What a shame.' But it’s even tougher when you’re the president of the United States and you have to watch this kind of a thing happen," Trump said.