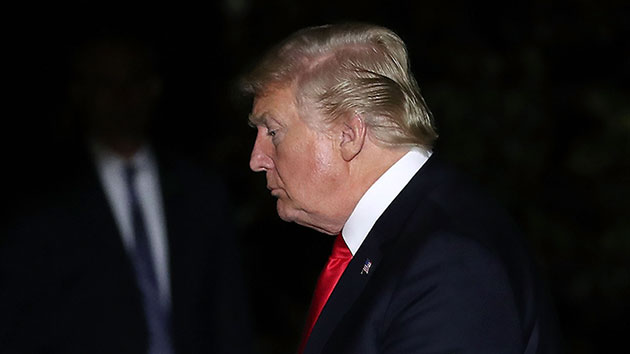 Mark Wilson/Getty Images(WASHINGTON) — The president of the United States wrote a half-sentence tweet criticizing CNN, deleted it and then wrote a full tweet criticizing CNN "and others" the same week the television network was mailed a bomb.
"Funny how lowly rated CNN, and others, can criticize me at will, even blaming me for the current spate of Bombs and ridiculously comparing this to September 11th and the Oklahoma City bombing, yet when I criticize them they go wild and scream, 'it's just not Presidential!'" Trump tweeted at 3:14 a.m. ET Friday morning.
At 2:48 a.m., he'd tweeted, "Funny how lowly rated CNN and others can criticize."
That tweet was quickly deleted, but ABC News obtained a screengrab.
This comes after Trump, at a rally earlier this week, bragged about "how nice I'm behaving tonight."
At least 10 explosive devices were mailed this week to prominent Democrats and Trump critics, including Barack Obama, Joe Biden, Hillary Clinton and Robert De Niro.
De Niro was critical of the commander in chief at this year's Academy Awards.
During an introduction of Bruce Springsteen, De Niro said, "First, I wanna say, 'F–k Trump. It's no longer, 'Down with Trump,' it's 'F–k Trump.'"
The president responded by calling the two-time Oscar winner "a very Low IQ individual."
Investigators are now focused on potential leads in South Florida, although, as noted by Bill Sweeney of the FBI's New York office, this is a "nationwide investigation involving multiple jurisdictions coast to coast."
Copyright © 2018, ABC Radio. All rights reserved.