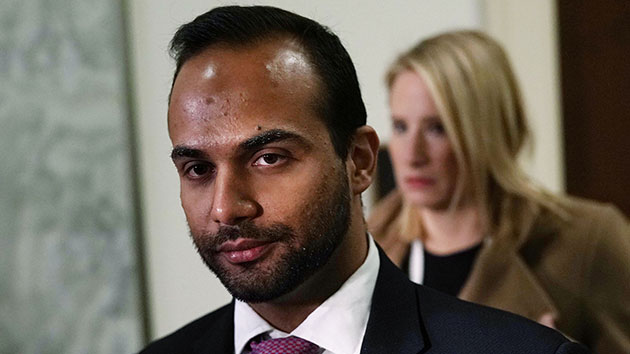 “Given certain information that I learned just yesterday – that I can't publicly disclose right now – I'm actually even considering withdrawing my agreement I have come to with the government,” Papadopoulos told “Fox and Friends” Friday morning.

Papadopoulos admitted to lying to federal investigators last year and was sentenced to 14 days in prison in September. The charges were prosecuted by Mueller as part of his investigation into Russian meddling during the 2016 campaign.

The 31-year-old energy scholar, who in 2016 attempted his foray into electoral politics with the Trump campaign, met with members from the House Judiciary and Oversight Committees for more than seven hours on Thursday.

Papadopoulos’s wife Simona Mangiante, an attorney who for months served as a spokeswoman for her husband, told ABC News she believes a reversal at this time is possible.

But legal experts told ABC News that backing out of a plea agreement at this stage is virtually impossible.

“The simplest way to put it would be – it is extraordinarily difficult to withdraw a guilty plea,” said Renato Mariotti, a former federal prosecutor who has closely followed the Mueller investigation. “If it wasn’t difficult, criminal cases would never be completed. People would always try for a do-over.”

“When he pled guilty he would have been required to answer questions that would now make it almost impossible for him to succeed,” Whiting said.

Whiting said Papadopoulos would have to show that his plea was not voluntary, but was coerced, or that he received ineffective assistance of counsel.

“The grounds are narrow and the guilty plea process is designed to ensure that all of the potential grounds are addressed and therefore it is extremely difficult for a defendant to undo a guilty plea,” he said.

Michael Volkov, a former federal prosecutor and Justice Department official, now a criminal defense attorney, said the only chance for Papadopoulos to make such a withdrawal would be if he claimed he was somehow not guilty of the offense of lying to an FBI Agent, “and I suspect he will not be able to make such a showing.”

Volkov said he believes Papadopolous’ new claims “are meant to feed the right-wing Republicans on Capitol Hill with information they can use to undermine Special Counsel Mueller’s investigation and is nothing more than a transparent attempt to “re-establish” his bona fides in conservative Republican circles.”