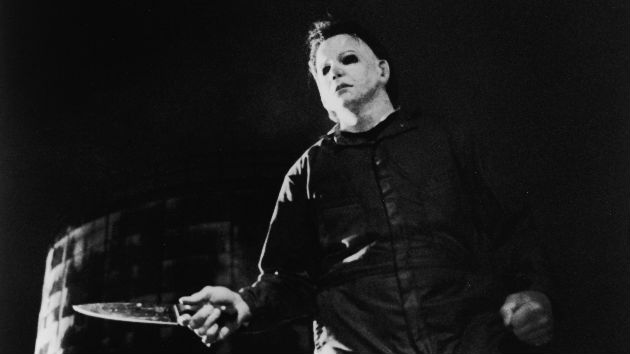 Photo by Fotos International/Courtesy of Getty Images
Posted on October 26, 2018 by ABC News

The 1978 original film celebrates its 40th anniversary on Saturday, just as its recently-released direct sequel heads into its second weekend at the box office.

The John Carpenter classic introduced the world to Michael Myers, the white-mask-wearing psychopath who returns to his hometown 15 years after murdering his sister on Halloween night. He begins stalking his next victims, including teenager Laurie Strode, played by Jamie Lee Curtis.

Curtis tells ABC Radio that looking back on the first film, she most vividly remembers the "technical" aspects of making a horror film on just a $300,000 budget. She says the stunts and scares were not as sophisticated as they are today. For instance, when filming the scene where she falls backwards over the stairs, all she had for safety was a piece of webbing and crew member standing below her with his hands up.

Halloween spawned seven other films which helped establish Myers' twisted backstory. A Rob Zombie remake was also released in 2007, followed by a sequel in 2009.

But none of those were quite as successful as the direct sequel, also called Halloween, released on October 19 of this year. It features Curtis reprising her role as Laurie, 40 years later, and facing her old tormentor once again. This time, she's targeted along with her daughter and granddaughter.

That film had a scary good opening last weekend, debuting at an estimated $77.5 million. It beat the franchise record opening of $26 million, previously held by the 2007 Rob Zombie reboot. Halloween also posted the second largest opening for an R-rated horror film trailing last year's It, which opened with $123.4 million.