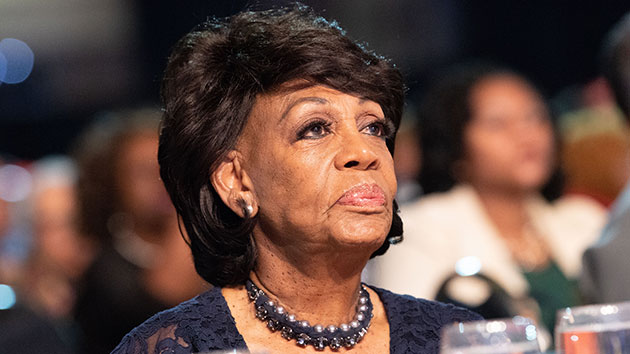 Earl Gibson III/Getty Images(WASHINGTON) — Rep. Maxine Waters spoke out on Thursday amid an investigation into suspected bombs mailed to her and other high-profile Democrats.
Waters, one of President Donald Trump's most outspoken critics, said the suspicious packages will not stop her from protesting the president's administration.
"We have to keep doing what we’re doing in order to make this country right. That's what I intend to do, and as the young people say, 'I ain’t scared,'" Waters, D-Calif., told Blavity in a video interview on Thursday. "We must not be intimidated to the point that we stop advocating and protesting for justice."
The FBI is investigating at least 10 suspected bombs, including two addressed to Waters. Law enforcement officials haven't disclosed any information about potential suspects in the case, but Waters said she blames the president.
"I think the president of United States should take responsibility for the kind of violence that we are seeing for the first time in different ways," Waters said. "I think the president of the United States has been dog-whistling to his constituency, making them believe that their problems are caused by 'those people over there.'"
Waters, 79, ignited controversy earlier this year when she called on her supporters to publicly confront and harass members of the Trump administration in response to the zero-tolerance immigration policy that separated families at the border.
Waters, whom Trump once called "an extraordinarily low IQ person," attempted to clarify her comments a few days later after Trump claimed she'd "called for harm" to his supporters.
"I believe in peaceful, very peaceful protests," Waters told reporters in June. "I have not called for the harm of anybody. This president has lied again when he's saying that I've called for harm."
Authorities intercepted suspected mail bombs addressed to Waters offices in Washington and Los Angeles this week. Former President Barack Obama, former Vice President Joe Biden, former Secretary of State and presidential candidate Hillary Clinton, CNN and other outspoken Trump critics were also targeted.
The FBI said the mailings were an apparent attempt to further political aims.
Trump urged the country to come together in "peace and harmony," but he said members of the media should bear some responsibility.
"A very big part of the Anger we see today in our society is caused by the purposely false and inaccurate reporting of the Mainstream Media that I refer to as Fake News," Trump tweeted Thursday.
"Funny how lowly rated CNN, and others, can criticize me at will, even blaming me for the current spate of Bombs and ridiculously comparing this to September 11th and the Oklahoma City bombing, yet when I criticize them they go wild and scream, “it’s just not Presidential,” he added in another tweet early Friday morning.
Copyright © 2018, ABC Radio. All rights reserved.