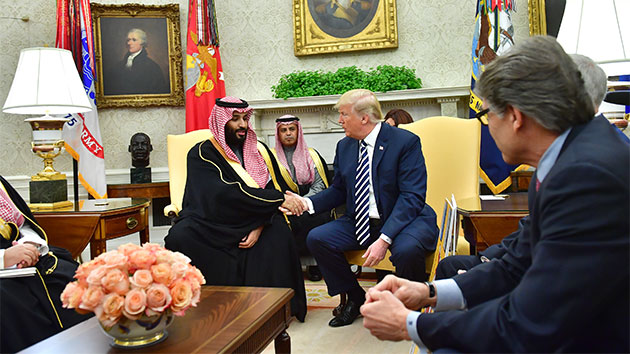 Kevin Dietsch-Pool/Getty Images(WASHINGTON) — The fiancée of slain Washington Post columnist Jamal Khashoggi says she is not open to a White House visit after President Trump's comments on the killing.

Speaking with Turkish television network Haberturk in her first interview since Khashoggi's death, Hatice Cengiz said she "died every day" since Khashoggi was killed by Saudi officials inside the country's consulate in Istanbul, Turkey. Khashoggi was there to pick up paperwork for his marriage to Cengiz, but he never came out, even as Cengiz waited for him for hours outside.

"If I knew something like this would happen, I would have agreed to not marry him and would never have wanted him to go inside," she said in Turkish during the interview, crying several times. "I have a huge emotional responsibility, an emotional conscience."

After Cengiz wrote an op-ed for the Washington Post, pleading with President Trump and his wife Melania for help, Trump told reporters on October 10 that Cengiz would "be most likely coming to the White House" "fairly quickly." The first lady's office was "in contact with her now, and we want to bring her to the White House," Trump added.

It's unclear if the first lady or her staff ever spoke to Cengiz, but Secretary of State Mike Pompeo did two days later, a State Department official told ABC News.

While Cengiz says she may still consider an invitation, she declined so far because of Trump's tone, saying she doubted his sincerity and viewed his invitation more as a way to win favor with the U.S. public.

"The statements he made about the subject were totally opposite within a very short period of time, and I totally took what he said [about a visit] as something he said to garner support from the public and considered it as such," she said Friday.

Cengiz added that she wasn't sure how the Trump administration's conscience was affected by what happened. She wrote in a New York Times op-ed on October 13 that she would consider accepting Trump's invitation "if he makes a genuine contribution to the efforts to reveal what happened inside the Saudi consulate in Istanbul that day."

So far, Trump has cast doubt on the Saudis' story of what took place, but he has refused to extend blame to the highest levels of the kingdom's leadership — King Salman and his son, Crown Prince Mohammed bin Salman, who is widely seen as the real power behind the throne and possibly the one who ordered this plot against Khashoggi.

One week after the Saudis admitted culpability for his death, the U.S. is weighing further action against its partner, despite its importance to the Trump administration's foreign policy. On Tuesday, Pompeo announced that 21 Saudi "suspects" would have their U.S. visas revoked or be deemed ineligible for a U.S. visa for their role in the murder.

The State Department declined to say Friday what further actions the administration may take, but an official told ABC News, "The Secretary continues to engage with Saudi leaders at the highest levels."

Cengiz said in the interview she has not yet received any condolence calls from the government of Saudi Arabia.

Khashoggi's son Salah, however, did. During a meeting with Prince Mohammed on Tuesday, Salah was photographed with a pained and sullen look as he received the monarchy's condolences. Saudi state media reported that Salah and his family expressed "great thanks" to King Salman and the Crown Prince, the man who may have ordered his father's death.