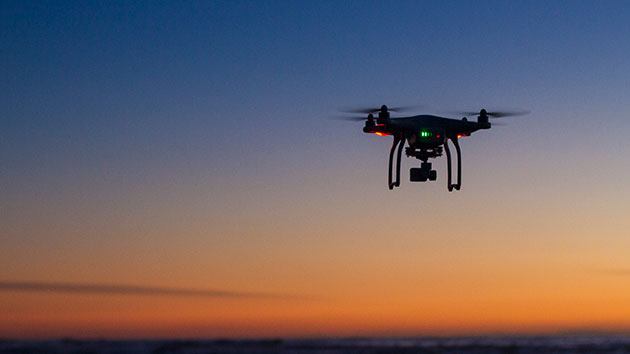 iStock/Thinkstock(WASHINGTON) — The Federal Aviation Administration (FAA) is expanding its efforts to keep drones from operating near high-priority Navy bases.
Effective Friday, drones will be required to maintain a distance of at least 3,000 feet laterally and 1,000 feet vertically from vessels operating in the vicinity of Naval Base Kitsap in Washington and Naval Submarine Base Kings Bay in Georgia.
The new regulation comes at the request of the Department of Defense and the U.S. Coast Guard, which have expressed concerns about drone overflights near sensitive locations for years.
A separate FAA notice issued on Friday advises drone operators to remain clear of DOD and Department of Energy facilities, mobile assets and Coast Guard vessels nationwide.
Officials at Kitsap and Kings Bay have continued to fight to limit drone use near those naval bases, despite the FAA banning the use of drones in the airspace above military installations in 2017.
Data obtained by the Kitsap Sunrequest Freedom of Information Act requests found that there were 31 instances of drone overflights in the airspace above Kitsap in 2017. As of July 8, there had already been 16 instances recorded this year.
Restrictions put in place by the FAA on Friday expand the restrictions for drones to vessels operating in the vicinity of these bases, not just airspace above the base itself.
The FAA also warned that Navy and Coast Guard vessels are required by law to "take protective action against drones perceived to be safety or security threats."
"This action could result in interference, disruption, seizure, damage or destruction of these drones," the FAA said in a press release on Friday. "Further, operators who do not comply with the FAA special security instructions also may be subject to enforcement action, including potential civil penalties and criminal charges."
Copyright © 2018, ABC Radio. All rights reserved.