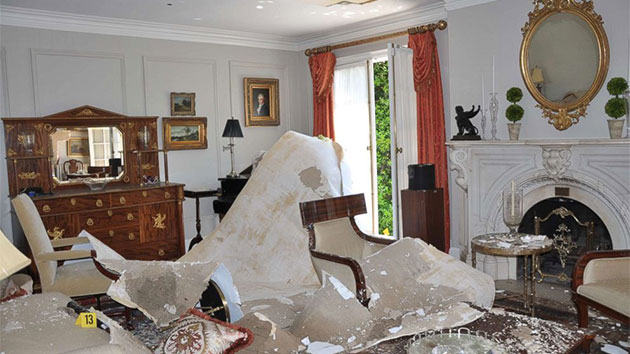 U.S. Dept. of Justice(WASHINGTON) — ABC News has obtained police evidence photos and video, some of which is being made public for the first time, used to help convict the man accused in the brutal 2015 murder of three family members and their housekeeper in a Washington, D.C., mansion.

Amy, Savvas and Philip Savopoulos and their housekeeper Veralicia Figueroa were killed in May 2015 in the family's multimillion-dollar home in an elite neighborhood in the nation's capital.

The four were found in the home after it had been set on fire. Savvas, Amy and Philip Savopoulos were pronounced dead at the scene. Figueroa was given CPR and transported to a local hospital, where she was later pronounced dead.

Daron Wint was convicted on charges of murder, kidnapping, burglary, extortion, arson and theft Thursday. He had pleaded not guilty to all charges.

Wint was on trial for seven weeks for the home invasion and brutal killings. During the trial, his defense team claimed that his brothers had committed the murders while he unknowingly remained downstairs. Wint's brother Darrell Wint testified against him and provided an alibi for the timeframe of the crime. He has not been charged in the case.

ABC News obtained evidence photos from inside the Savopouloses' mansion, surveillance video of Wint, a 911 call made the day of the house fire and other pieces of evidence presented during Wint's trial.

Beginning on May 13, 2015, the victims were held captive overnight as the adults were bound to chairs, beaten with a baseball bat and strangled. An autopsy found that the couple's 10-year-old son, Philip, had been killed by "thermal and sharp-force injuries." He was found in his bedroom.

Investigators said the fire in the home had been started in Philip’s bedroom. Amy Savopoulos’ Porsche was found burning in a church parking lot in neighboring Prince George's County, Maryland, the same afternoon as the bodies were discovered.

Wint was tied to the scene after investigators found DNA evidence off a half-eaten pizza found in the home. After a nationwide manhunt, police found him on May 20, 2015, stopping his car near the Maryland-D.C. border. In it, they found "a large stack of what appeared to be $100 bills" and money orders, according to court documents.

Savvas Savopoulos' assistant Jordan Wallace testified that his boss had left him a voicemail the night before the murders, asking him to go to Savopoulos’ office the following morning for a package.

Among the evidence obtained by ABC News is a surveillance video showing Wallace and Savopoulos’ colleague in a bank the next morning, May 14, 2015, as the colleague withdraws a large amount of money. Wallace says that per Savopoulos’ instructions, he then drove to the family’s home and left a package containing $40,000 on the seat of one of the cars parked in the family's garage.

Evidence photos include images of the box that held the pizza tied to Wint, a baseball bat with what appeared to be blood located in the bedroom where three of the victims were found, the remains of Amy Savopoulos’ car and the mansion after the fire had been extinguished.