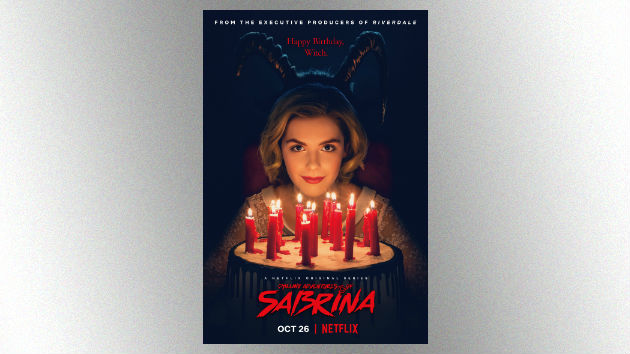 NetflixIf you're a fan of the sitcom Sabrina the Teenage Witch, you'll be in for a surprise when you check out Chilling Adventures of Sabrina, which hits Netflix today. It's still about half-human, half-witch high-schooler Sabrina Spellman, her aunts Hilda and Zelda, her boyfriend Harvey and her cat Salem, but this version's a dark, twisted horror series.

Show's creatorRoberto Aguirre-Sacasa tells ABC Radio, "Almost everyone knows Sabrina from the '90s sitcom with Melissa Joan Hart…and…at first, they're surprised to hear that there's a sort of more serious, more horror movie-like take on the character, but then when they see it, they understand it."

He's not kidding: this Sabrina finds herself in all kinds of creepy, sometimes gory, situations, and literally facing off against Satan himself. That's why Aguirre-Sacasa, who also created the show Riverdale, says he scrapped the original plan to have this show be a Riverdale spinoff.

"If we had tried to this as a spin-off out of Riverdale, it would've been on broadcast television, and I think some of the themes and some of the stuff that happens on the show might not have gone over too well," he laughs.

Kiernan Shipka, best known as Sally Draper on Mad Men, plays Sabrina, and Aguirre-Sacasa says she was perfect for the role.

"She is very much a teenage girl, but she also has an old soul, and she has a lot of gravitas," he explains. "You know, this is Sabrina taking on the dark lord, the devil. You need an actor who's got a certain amount of confidence, a certain amount of poise, and that's Kiernan…We want Sabrina to be a role model for young women."