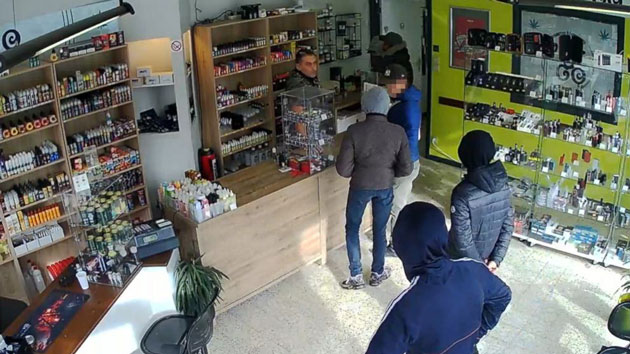 Obtained by ABC News(MONTIGNIES-SUR-SAMBRE, Belgium) — When a Belgian shop owner was confronted with a gang of alleged robbers in his store, the quick-thinking merchant told the group to come back later in the day, when he would have more money for them to steal.
They did as he had advised, and when they returned to the store they were arrested, according to local police and the shop owner.
The merchant, who identified himself as Didier but declined to provide his last name for fear of retaliation, owns an e-cigarette store in the Montignies-sur-Sambre section of Charleroi, Belgium.
He told ABC News that a group of alleged robbers entered his shop last weekend and demanded money.
“I told the robbers that 3 p.m. is not a good time to do a robbery," he explained. "I told them to come back later, at 6:30 p.m., because I’ll have much more money in the cash register at this time of the day."
"They agreed to come back later in the day,” he said.
Surveillance video shows the six robbers in the store chatting with Didier for about 15 minutes.
About 30 minutes later Didier called Charleroi Police and informed them about the robbers.
"I told them what [had] just happened and [the] policemen told me they didn't think the robbers would return," he said.
The brazen thieves came back to the shop as the merchant had advised, but the group was sent away again, the video shows.
Finally they came back for more money for the third time.
This time, though, the merchant said, "undercover policemen were hiding in the back room of the store and arrested them."
A spokesperson for the Charleroi Police confirmed the merchant's account to ABC News.
Police initially arrested one of the alleged thieves inside the store, and four more outside the shop.
Authorities have not publicly named the suspects, and it was not immediately clear if any of them had retained attorneys.
Copyright © 2018, ABC Radio. All rights reserved.

Trevor Noah to return as host of the 2022 Grammy Awards
Safe containing at least $11K stolen from Coalport VFW
A tearful Tom Holland tells fans that new ‘Spider-Man’ trailer is just “the tip of the iceberg”
$6,000 paid for HVAC work in Reynoldsville but never completed
Kirsten Dunst reveals if she’d return to ﻿’Spider-Man﻿’, ﻿﻿”Why not?”
Money and raffle tickets stolen from CenClear preschool