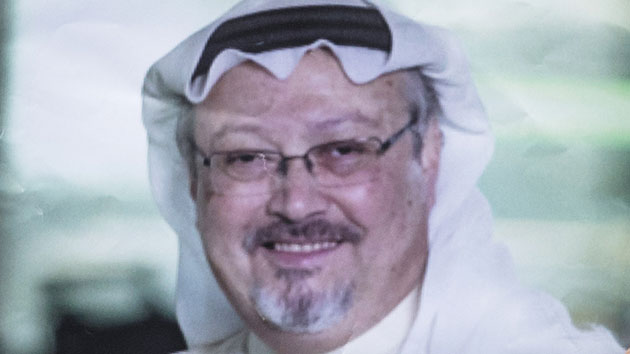 Chris McGrath/Getty Images(RIYADH, Saudi Arabia) — Saudi prosecutors have called the killing of journalist Jamal Khashoggi "premeditated" for the first time, two days after Turkey's president also made the claim.
The Washington Post columnist's killing in the Saudi consulate in Istanbul on Oct. 2 was carried out with "prior intention," Saudi Attorney General Saud al-Mojeb said Thursday, according to the state-run Saudi Press Agency.
Prosecutors reached that conclusion based on information Saudi Arabia received from Turkey as part of the countries' joint investigation into Khashoggi's death, according to the statement from the attorney general.
Since Khashoggi was not seen again after entering the consulate earlier this month, Saudi Arabia's version of events has shifted several times, and Saudi officials have come under increasing pressure to account for what happened to him.
On Tuesday, Turkish President Recep Tayyip Erdogan called the murder "savage" and that it was pre-planned.
Saudi Crown Prince Mohammed bin Salman on Wednesday spoke publicly about Khashoggi's death for the first time, calling it "an ugly incident that cannot be justified," but stopping short of saying whether it was premeditated.
Copyright © 2018, ABC Radio. All rights reserved.

‘Guilty’: Jury finds all 3 men guilty of murder in the killing of Ahmaud Arbery
As Amazon takes victory lap for ‘The Wheel of Time’ debut, it’s eyeing series based on ‘Mass Effect’ video game
T-Mobile to pay nearly $20 million after outage leads to thousands of 911 calls failing
Ahmaud Arbery death trial live updates: Jury asks to review evidence for first time
What we know about Chinese tennis star Peng Shuai as the UN calls for probe into her whereabouts
Should you get a booster shot? Experts say it’s time