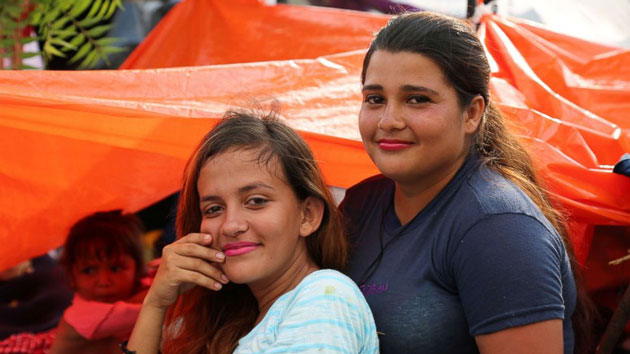 Robert Zepeda/ABC News(MAPASTEPEC, Mexico) — The march moves on. After resting in the Mexican town of Huixtla for more than 24 hours, the migrant caravan journeyed 40 miles north to the town of Mapastepec. Waking up as early as 5 a.m. to beat the heat, many people did what they had done the day before: piled onto the back of flat bed trucks or hung off the sides of semi trailers, despite the dangers they pose. That same dangerous method of travel took the life of a 22-year-old migrant earlier this week.
Mapastepec, in Chiapas state, is much like the previous Mexican towns the caravan has arrived in. As migrants arrived, a park in the center of the city filled with makeshift tents and lines for the bathroom. Instead of the portable toilets in Huixtla, migrants could use the bathrooms in both a local school and a dilapidated cultural center.
The men outnumber the women among the more than 5,000 people in the caravan, a number that has already dropped significantly in recent days, and which is now splitting into different groups, according to Amnesty International. Some of the women who are traveling alone or with small children expressed their concerns about safety. Nearly all of the people we spoke to mentioned the exhaustion of the journey so far and the uncertainty about what was to come.
Throughout this week, ABC News has spoken to some of the people making the journey and trying to help. These are their stories.
Franklin Padilla, 10
Migrant from Honduras
Franklin is traveling with his mother and two younger brothers, ages 6 and 1.
"My mom told me we are going to the U.S. so she can work," he said. "I miss my friends back in Honduras the most."
When asked where his father was, he responded with tears in his eyes: "They killed him," but he was unaware of why.
Franklin's mother said her husband was killed by a close friend of his, and her fears for her children's safety was one of the reasons they fled their hometown to make the journey to a totally unknown country. She said she has always thought about going to the U.S. this way but has been scared because of what could happen to her and her kids. When she heard about this caravan on TV, she made the decision to go.
When asked how long he thinks it will take to get to the U.S., Franklin said: "20 days. I don’t know how but I just know it."
Berta Alicia Benitez, 38
Migrant from Honduras
Benitez is traveling alone with her 14- and 8-year-old daughters.
"I can’t sleep much because I’m worried about my girl and that other men will take her," she said of her 14-year-old.
She explained that she had heard a rumor that there were bad people looking to take kids in the last city they were in, so she decided to spend her day in a makeshift shelter for women and children only.
"I’m not trying to criticize my country, but I want to leave Honduras to get out of the poverty that we are living in," Benitez said. "My dreams are to build a house for us and for my girls to study. Study a lot."
Dania Manzo, 24
Store owner in Acacoyagua, Mexico
"I own a tortilla store in town, so people came to donate clothes so we could hand them out to the migrants," Manzo said. "I feel solidarity with the migrants because you never know when it might happen to you. I feel the worst for the kids."
"If they have a dream they should follow it," she added.

Jose Martin Barahona Vargas, 30 and Jesus Zepeda, 22
Migrants from San Pedro Sula, Honduras
The two friends are traveling together and said they heard about the caravan on the news.
To the American people, Barahona Vargas wanted to say: "Please give us a helping hand. We're not there to give you any trouble."
"It’s been a complicated journey especially because of the heat. It’s hotter than in Honduras," he added.
Zepeda said the political situation in his country since the 2017 presidential election, in which there were widespread reports of fraud, is also a factor.
"It’s hard because of the government we live with. The president didn’t truly win the election and Donald Trump helped him to keep his position," Zepeda said. "I feel bad when I hear Donald Trump say he doesn’t want us. All we want is to work. I’d wash dishes. No one wants to wash dishes in America. We will."

Natividad Banegas, 18
Migrant from southern Honduras
Banegas is gay and traveling with two friends, one of whom is also gay. They say so far, they have been treated well by others in the caravan.
"I joined the caravan because there aren’t any jobs and there is lots of discrimination against us," Banegas explained. "They don’t treat us like we’re real people."
"Men have tried to sexually assault me in Honduras but I was able to protect myself," he added. "My dreams are to find a job and help my family back home."

Erick Guifarru, 31
Migrant from central Honduras
Guifarru said he has tried this journey once before in April on his own, but he was caught and sent back. He said he's now trying by caravan after hearing about it on the news. He has been using a portable solar panel he brought from Honduras to save money and charge his devices.
"It’s really hard in Honduras. No jobs. No food. No medicine," Guifarru said. "I worked in transportation but left the business because of extortion of drivers by gang members. It was too dangerous."
"This is a rough journey. But the Mexicans are helping us get there. God will have the last say," he added.
Maria Lucia Vigil Bardales and her daughter, Meylin Bardales, 2
Migrants from San Pedro Sula, Honduras
Meylin Bardales' mother made the decision in a day to join the caravan so she could find work. She said that she had to leave her 13-year-old behind to make the journey. "Leaving my family behind is the hardest part," Maria Lucia Vigil Bardales said.
Ann Louisa
Migrant from Guatemala City, Guatemala
"Not all of us that are fleeing are bad."
Monserrat, 4, and Emily, 2
Migrants traveling with their father from San Pedro Sula, Honduras
"I’ve left for violence and security," the girls' father, who did not give us his name, said. "The journey is very hard because of the sun." He also said the journey has caused "emotional problems" for the children, who are unaccustomed to this life.
Gadiel Gutierrez, 16
Resident of Huixtla, Mexico
"All we can do is welcome them and have empathy," Gutierrez said of the migrants who are sleeping in his town before moving further north.
Astrid Daniella Aguilar, 18, and Kenssy Roque, 16
Migrants from Tegucigalpa, Honduras
The girls are best friends traveling in the caravan together. Sitting on a staircase in Huixtla's central square, they entertained each other by a applying bright lipstick. Both said that at home, the schools have no books, there's no medicine and no work.
"Walking is the hardest part," Aguilar said. "I think I will see my parents again. I don’t know when."
When we asked about her parents, Aguilar told us her father is in the hospital after being stabbed. She said he was mugged for his phone and some money on his way to work, part of the violence endemic to Tegucigalpa. Both girls said their biggest concern during this trip is being sexually assaulted.
Cesar Mejia, 23
Migrant from San Pedro Sula, Honduras

"I was discriminated and beat up so it was time to go," Mejia said of his decision to leave Honduras, where anti-LGBTQ violence is prevalent.
"At first I was afraid to wear the (rainbow) flag. I didn’t know how people would react. In Guatemala, people were asking me what country the flag was and I told them it was the flag of the world," he said. "If I had the opportunity to make it to the border, I could show my representation of the community and ask for asylum because there is a lot less discrimination than Honduras."
Kimberley Olivares, 20, and Muñeca
Migrant from San Pedro Sula, Honduras
"I brought him because he's part of the family," Olivares said of her three-month-old puppy.
Belem Moreno, 25
Volunteer with Mexican Red Cross
"I’ve been treating people for open sores on their feet, heat exhaustion, fainting, convulsions, stomach pains, and children who have fallen and have burns on their feet," Moreno said. She said this is the largest group she has treated at one time.