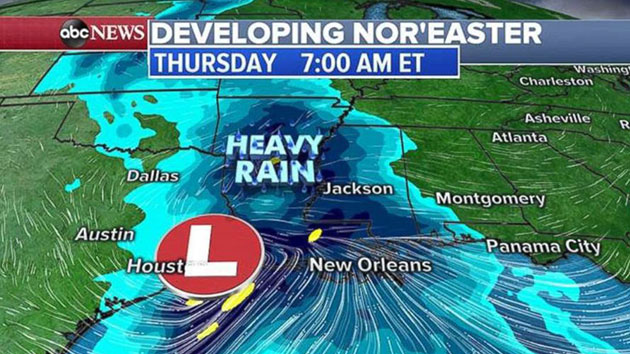 ABC News(NEW YORK) — Texas continued to get hit by heavy rain early Thursday even as flooding continued in the state from downpours last week.
The remnants of Tropical Storm Willa is also bringing heavy rain to most of the Southeast, including Panama City and the rest of the Florida panhandle, where residents are still recovering from Hurricane Michael earlier this month.
On Thursday morning, the storm was near Houston, bringing heavy rain from New Orleans up into Arkansas.
By Thursday afternoon and evening, rain could intensify from the Panama City area up to southern Alabama, where some flash flooding is possible.
The storm system is expected to move north Friday into the Carolinas, bringing heavy rain and wind to Wilmington, North Carolina, an area hard-hit by Hurricane Florence last month.
That heavy rain is forecast to spread into the Northeast Friday evening and night, and into Saturday morning. Gusty northeast winds in the Northeast will be as high as 30 to 40 mph with gusts near 50 at the coast.
Coastal flooding is possible in the area, as well as road flooding inland and in urban areas.
As the storm system moves from the Gulf Coast into the Northeast, 1 to 3 inches of rain is possible for major cities along the way. Mountainous areas of northern New York state, Vermont, New Hampshire and Maine could see snow and a mix of snow and rain.
Copyright © 2018, ABC Radio. All rights reserved.