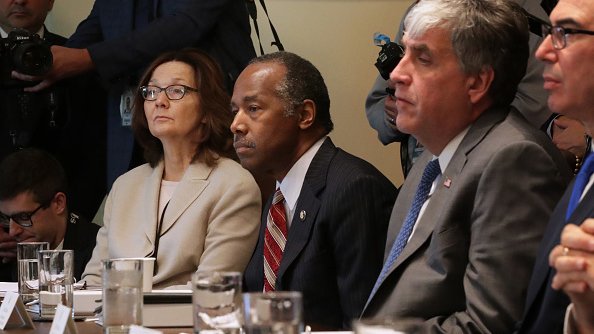 Chip Somodevilla/Getty Images(WASHINGTON) — President Trump has been briefed by CIA Director Gina Haspel on the latest in the U.S. investigation into how Washington Post columnist Jamal Khashoggi was killed in the Saudi consulate in Istanbul, Turkey.
The CIA had no comment on a Washington Post report that Haspel had listened to audio purportedly capturing Khashoggi's killing.
The president's briefing comes as Khashoggi's son Salah, his wife, and their children were finally able to depart Saudi Arabia after reportedly being under a travel ban, according to Sarah Leah Watson, Human Rights Watch's executive director for the Middle East and North Africa.
Salah is a dual U.S. and Saudi citizen, and he was headed to the United States, State Department deputy spokesperson Robert Palladino said earlier Thursday.
Secretary of State Mike Pompeo had told the Saudis "that he wanted Salah Khashoggi to be able to return to the United States, and we are pleased that that is the case," Palladino told reporters Thursday.
Palladino said the U.S. continues to seek all relevant facts and will not make any judgments until then, including about Crown Prince Mohammed bin Salman's role or what potential further penalties the U.S. would take against the Saudis after penalizing 21 Saudi officials with U.S. visa bans. While he refused to put a timeline on the investigation, he urged quick results.
"The longer the investigation takes, the more concerned we become about its impact and its efficacy, and the longer it takes, the longer questions remain about this tragedy that remain unanswered," he said.
Two days ago, Salah Khashoggi met with Prince Mohammed, the man who may have ordered his father's murder, and was seen in photographs appearing sullen and pained. Salah and family expressed "great thanks" to the crown prince and his father King Salman, according to Saudi state media, and they, in turn, expressed their condolences.
Pressure has been increasing on Saudi Arabia to reveal what happened after their initial denials were proven false and their later explanations have shifted. The latest change came Thursday when the Saudi prosecutor said there was evidence that the murder of Khashoggi was premeditated, three days after a Saudi official told ABC News, "There was never a plan to kidnap or kill him."
The Saudis said Turkish authorities shared the new evidence with them, but they declined to confirm the detail themselves. Either way, they maintain that the operation was never ordered by Saudi leadership and was instead a rogue directive by a deputy intelligence chief that was botched by a 15-man team. Neither King Salman nor Prince Mohammed knew about it beforehand, the Saudis say.
It's unclear whether U.S. intelligence agrees. While several Republican and Democratic members of Congress have said the crown prince either knew or even ordered the operation, President Trump has so far repeated the Saudi line that both men denied any knowledge.
That could change after his briefing with Haspel, however, who is back in Washington after a trip to Turkey where she was briefed on Turkey's own investigation. Turkish President Recep Tayyip Erdogan said Tuesday in an address to parliament that the murder was "savage" and pre-planned.
Last Friday, the Saudi government admitted that Saudi officials were responsible for the death of Khashoggi, who they said died in a fistfight — later saying it was from a chokehold after he raised his voice in the consulate.
While Pompeo was in Haspel's briefing, the State Department declined to provide a readout.