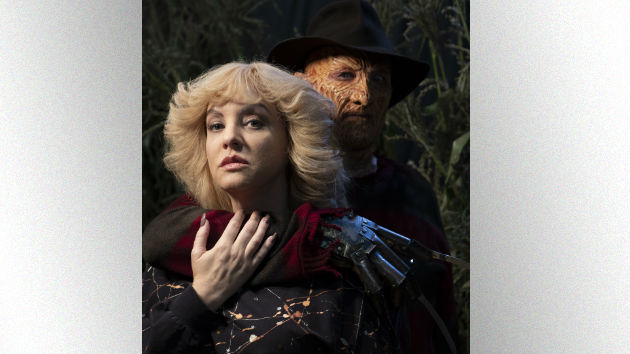 ABC/John Fleenor(LOS ANGELES) — The '80s throwback series The Goldbergs has mined another gem from the Reagan-era: the Nightmare on Elm Street series.
The sitcom scored a scary "get" in the form of Freddy Krueger himself, actor Robert Englund, for Wednesday night's Halloween themed episode. It's the first time in 15 years that the actor will be seen as the razor-clawed, classic character.

"I didn't think it was going to be a good fit," Englund admitted to ABC Radio. "I was worried, I've been trying to protect this character for so long…"

He adds, "Freddy's been on Family Guy, he's on The Simpsons…and so I just, it's not my job any more to protect this character, he's been so absorbed by popular culture. So I just thought I can have a little fun with him now."

Englund explained that despite the fact that his fellow cinematic stalker Michael Myers is back on the big screen, slaying 'em in the hit reboot Halloween, the 71-year-old has likely hung up Freddy's claws for good. "I just don't think I'm right for Freddy any longer, I'm too old. I'd love to be invited in to one of the Nightmare on Elm Streets down the line … as a cameo, to play maybe the professor of dream psychology or something. I think that would be a treat for the fans, and a kind of a pun."

As for the Goldbergs episode, Englund says his character will meet his match in another fearsome character — family matriarch Beverly Goldberg. "It's a real kind of Valentine both to the [Goldbergs] fans and to my fans, this kind of meeting of Freddy and Bevvy."

See for yourself tonight at 8 p.m. Eastern on ABC.