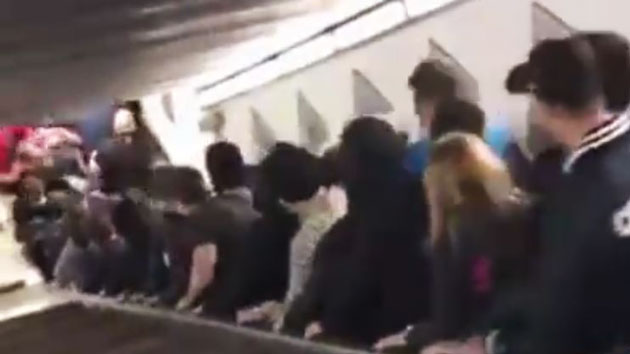 ABCNews.com(ROME) — Dozens of Russian soccer fans have been treated at a hospital in Rome after an escalator seriously malfunctioned at the Repubblica station of the Rome Metro Line A on Tuesday night.
Footage shared on social media showed a packed down-escalator stair hurtling at alarming speed, causing a mound of people to crash at the bottom.
Italian news agency ANSA reported that the most serious injury was to a young man whose foot was so badly mangled he was at risk of amputation, and six more are in serious condition.
Pictures of the aftermath showed the escalator stairs crumpled at the bottom, leaving jagged and exposed metal plates in a spot where the pile of people crashed into each other.
At the time, hundreds of soccer fans were traveling to a Champions League match between Italian and Russian teams playing in the group stages.
Witnesses provided conflicting reports of travelers on the escalator singing and dancing or jumping, although some have told Italian media there was no jumping.
Roman authorities have opened an investigation into the accident. The BBC reports that the local transport authority, Atac , has said monthly checks are carried out on transport infrastructure including escalators.