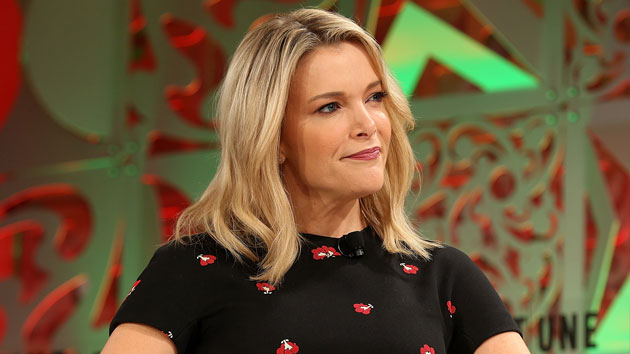 Phillip Faraone/Getty Images for Fortune(NEW YORK) — NBC host Megyn Kelly has apologized for comments she made Tuesday on her morning show in which she questioned why dressing up in blackface for Halloween is inappropriate.
"I want to begin with two words: I'm sorry," Kelly, visibly emotional, said at the top of her live-audience show Wednesday morning. "You may have heard that yesterday we had a discussion here about political correctness and Halloween costumes.
"And that conversation turned to whether it is ever OK for a person of one race to dress up as another — a black person making their face lighter or a white person making theirs darker to make a costume complete," she continued. "I defended the idea, saying that as long it was respectful and part of a Halloween costume, it seemed OK. Well, I was wrong and I am sorry."
"I have never been a 'PC' kind of person, but I do understand the value in being sensitive to our history, particularly on race and ethnicity," she added. "This past year has been so painful for many people of color."
"The country feels so divided, and I have no wish to add to that pain and offense," she continued. "I believe this is a time for more understanding, more love, more sensitivity and honor, and I want to be part of that."
Kelly, who left Fox News in 2017 and began hosting her daytime talk show "Megyn Kelly Today" on NBC, issued a similar apology in an email to colleagues Tuesday.
She brought up blackface during a segment on her show Tuesday morning, while holding a round-table discussion with an all-white panel about offensive Halloween costumes.
"But what is racist?" she wondered aloud. "You do get in trouble if you are a white person who puts on blackface in Halloween or a black person who puts on white face for Halloween. Like, back when I was a kid, that was OK as long as you were dressing up as, like, a character."
Kelly also defended a reality TV star who darkened her skin to dress up as Diana Ross.
"Some people said that was racist," she said. "I felt like, who doesn't love Diana Ross? She wants to look like Diana Ross for one day, and I don't know how that got racist on Halloween."
Kelly's remarks quickly drew backlash on social media.
"I cannot believe the ignorance on this in 2018," Padma Lakshmi wrote on Twitter. "You are on national television. You have a responsibility to educate yourself on social issues @megynkelly. This is so damaging."
Kelly's fellow NBC hosts also condemned her comments during a segment on "Today" Wednesday morning, prior to her on-air apology.
"The fact is, while she apologized to the staff, she owes a bigger apology to folks of color around the country," co-host and weather anchor Al Roker said.
"This is a history going back to the 1830s," Roker continued. "Minstrel shows to demean and denigrate a race wasn’t right. I'm old enough to have lived through 'Amos 'n' Andy,' where you had white people in blackface playing two black characters, just magnifying the worst stereotypes about black people — and that's what the problem is and that's what the issue is."
"There was some criticism yesterday online that this was political correctness run amok," co-host Craig Melvin added. "That's silly and it's disingenuous and it's just as ignorant and racist as the statement itself."
"In addition to her being a colleague, she’s a friend," he said. "She said something stupid. She said something indefensible."
It's not the first time Kelly has been under fire for remarks about racial issues. In 2013, the then-Fox News anchor informed the "kids watching at home" that both Santa Claus and Jesus Christ were white.