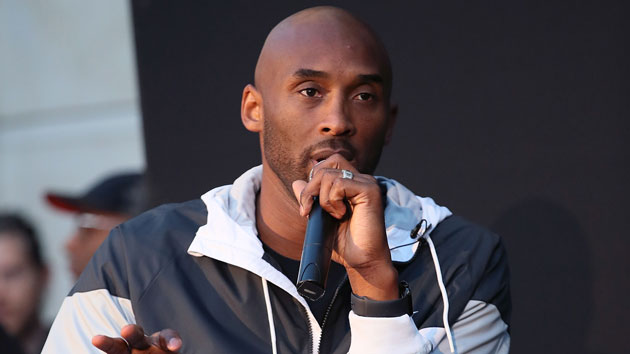 David Livingston/Getty Images(LOS ANGELES) — Kobe Bryant revealed that although he once took up tap dancing to improve his skills, the NBA star said he felt forced to keep it a secret.
Bryant spoke out about his secret lessons in an interview with Jimmy Kimmel on Tuesday, when the late-night host asked him if he had any celebrity friends who might surprise his fans.
"Surprised? I don't know. Maybe not surprised, but, you know, recently, I've been spending a lot of time with Debbie Allen," Bryant said, referring to his famous dance teacher.
The former Los Angeles Lakers superstar said he began tapping in 2000 when he sprained an ankle during the NBA Finals. He said the tap lessons helped him recover, improved his endurance and even built up his strength
But he still felt embarrassed.
"Well, it was kept secret for obvious reasons,” Bryant said Tuesday, adding that he had to get customized size-14 tap shoes. "I had to get them made. I can't go to a store and be like, 'Yeah, I'll take those size 14s. Tap.'"
He said he doesn't consider himself an "accomplished tapper," but does think he had some potential.
"[At one point,] I could, like, tell my feet to do this, and they would actually do that," he said. "I walked into the studio, and it's all these, like, 6-year-olds … and these kids are looking up at me like, what in the world? What's this grown-ass man doing in here learning tap dance?"
Bryant, who revealed the secret in his new bodycare book, said spoke out about it because thought it might help young athletes.
In "The Mamba Mentality: How I Play," Bryant said he reveals other secrets about the game, but the key is to teach athletes about the importance of holistic self-care.
"We psych ourselves up too much," he said. "If you try to talk yourself into, 'This is a big moment, it's a big shot,' you're putting a lot of pressure on yourself. You've shot that shot hundreds and thousands of times, just shoot another one. It's like breathing. You do it so many times, you just do it again."
Copyright © 2018, ABC Radio. All rights reserved.