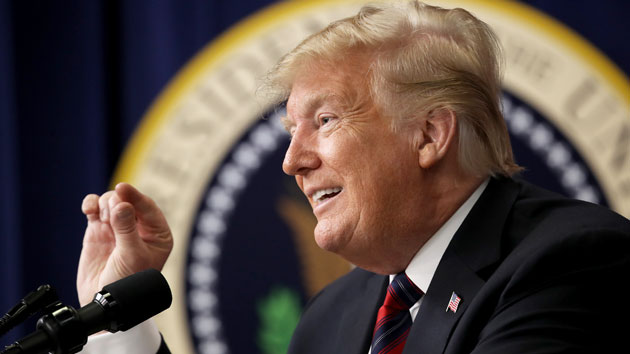 Win McNamee/Getty Images(WASHINGTON) — The Republican chairmen of two key congressional committees, who likely would be involved in drafting the middle-class tax cut President Donald Trump started touting this week, on Wednesday contradicted what he's said about the surprise move just before the midterm elections.
On Tuesday, the president suggested that middle-class Americans would receive an additional tax reduction beyond one that was in the package signed into law last year.
“It's going to be a tax reduction of 10 percent for the middle class,” Trump said in the Oval Office. “And this will be on top of the tax reduction that the middle class has already gotten.”
But Sen. Mike Crapo of Idaho, the GOP chairman of the Senate Banking Committee, said Wednesday that the president was actually talking about making permanent existing lower rates, which for procedural reasons can be maintained for only 10 years.
The president has not said anything about making existing tax cuts permanent when referring to what he's called a tax cut "resolution," and in fact, as quoted above, has explicitly said it would be “on top of” the reductions already in place.
Regardless, Crapo continued by noting that tax cuts temporarily put in place during the George W. Bush administration were made permanent before they expired.
“It's the same kind of dynamic now,” Crapo said. “We're going to hopefully deal with that issue now rather than waiting ten years to do it.”
Sen. Orrin Hatch, R-Utah, the chairman of the Senate Finance Committee, who played a key role in the previous tax bill’s package, would not tell reporters Wednesday how much he knew about what the president has been talking about.
“We're going to have to get into more details before I comment about it. But it'll come right to me so I'll be doing my best not to mess it up,” Hatch said.
When pressed as to whether there even was an actual tax cut proposal, Hatch responded, “Well, I have a general knowledge but I don't feel like I should comment about it.”
Hatch also said he had not seen the so-called “resolution” that Trump had been talking about, which Trump said Tuesday would be introduced at “the end of the week or early next week.”
“I don't have it yet, so I'll wait and see what he does. I'll be happy to listen to him in every way,” Hatch said.
Asked why Republicans would submit a nonbinding resolution when they control both chambers of Congress and the White House, Hatch responded, "Well, we're in the middle of a very contentious, tough year. So we'll just have to see."
Congress does not reconvene until after the Nov. 6 midterm elections so no piece of legislation could be introduced before then unless the House and Senate were to return early, which is extremely unlikely.
Copyright © 2018, ABC Radio. All rights reserved.