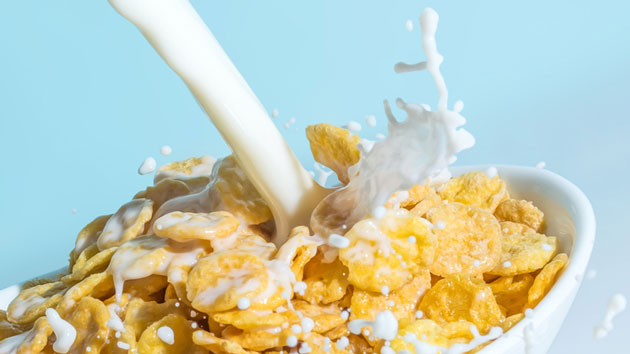 iStock/Thinkstock(WASHINGTON) — An environmental advocacy group reports it has found small amounts of a herbicide in consumer foods including breakfast cereals, saying there is cause for concern even though the amount is within limits allowed by the Environmental Protection Agency.
Just how much, if any, of the herbicide can be considered safe is a matter of long-running scientific and legal debate. The Environmental Working Group's standard for what's acceptable is not, by far, the most conservative.
The Environmental Working Group commissioned tests of popular breakfast products, including Quaker Oats Instant Oatmeal and other breakfast cereals and found low levels of glyphosate, a weedkiller sprayed on crops, in all 28 samples it tested. The group says companies should do more to eliminate chemicals from food products, even if the levels are within the limits of what the government considers safe.
Quaker insists its products are safe and called the EWG study "invalid."
Glyphosate is the active ingredient found in the weedkiller RoundUp and has been a source of controversy amid claims that it is connected to certain kinds of cancer. The company that makes RoundUp, Monsanto, says its research shows glyphosate is safe but a California jury recently ordered the company to pay $289 million to a man who argued his terminal Non-Hodgkin's lymphoma was connected to RoundUp.
Monsanto is in the process of appealing that case. A judge upheld the verdict this week but reduced the amount the company has to pay to $78 million, according to the Associated Press.
EWG released the results of an earlier set of tests in August. The group tested 45 samples of conventional granola bars and cereals and 16 organic products. It said it found some amount of glyphosate in three-fourths of the products with small amounts in five of the organic products.
Regulators like EPA and international groups say it's not likely glyphosate causes an increased risk of cancer in humans, but at least one agency connected to the World Health Organization listed it as a "probable carcinogen" in 2015. The California health office has also listed glyphosate as known to cause cancer and the state's recommended level is lower than that recommended by the EPA.
The EWG based its threshold on California's conservative guidelines, but it started with California's threshold for what's considered acceptable and reduced it by 100 times. They claim this is to account for what would be acceptable in drinking water samples and taking into account small children.
EWG says it based its number on California carcinogen standards which tend to be the most conservative in the U.S.
The EPA says consumers don't need to be concerned and that the levels are well within limits considered safe.
"EPA’s review of available data does not support recent claims that glyphosate, the active ingredient of RoundUp, found in cereal (and other foods containing commodities like wheat and oat) is cause for concern," an EPA spokesman said in a statement.
The EPA's recommended limit on glyphosate in food is 30 parts per million, or 30,000 parts per billion, well above the levels found in the samples tested by the Environmental Working Group. EWG identified glyphosate in much lower levels of the 28 samples tested, with the highest at 2,837 parts per billion in Quaker Oatmeal Squares Cereal.
Quaker strongly rebutted the EWG study in a statement to ABC News. The company said they stand by the quality of its products and that any amount of glyphosate left on the product after it is cleaned is well below the allowed limit.
"The EWG report artificially creates a “safe level” for glyphosate that is detached from those that have been established by responsible regulatory bodies in an effort to grab headlines, and has the potential to falsely alarm consumers, leading them to avoid consumption of many oat-based foods that are proven to be beneficial for the human diet," a Quaker spokesperson said in a statement.
"We believe EWG’s approach is invalid, and we stand behind our statement that the Quaker products tested by EWG are safe. Producing healthy, wholesome food is Quaker's number one priority, and we've been doing that for more than 140 years."
EWG says it chose to test for a lower limit of glyphosate because it believes the EPA limit is too high, saying that "just because something is legal, doesn't mean it's safe."
“Our main goal here is that we really don’t want parents to have to have this added risk or concern that this food they’re serving their children could have a pesticide that’s been linked to cancer in those products. So, ultimately we really want companies to take the initiative and the steps to remove glyphosate from their products,” EWG toxicologist Alexis Temkin told ABC News.
The group tested 28 samples of products made with oats, and found the presence of glyphosate in 28 of them, with levels they considered unsafe in 26. They reported that any level greater than 160 parts per billion was not safe. EWG purchased the products in San Francisco and Washington, D.C.,-area grocery stores and they were analyzed at Anresco Laboratories in San Francisco.
The Food and Drug Administration recently tested for glyphosate and other herbicides in hundreds of crop samples, including grains and oats, but none of the samples violated EPA limits. The test did find some amount of glyphosate in a majority of corn and soybean samples.
Copyright © 2018, ABC Radio. All rights reserved.