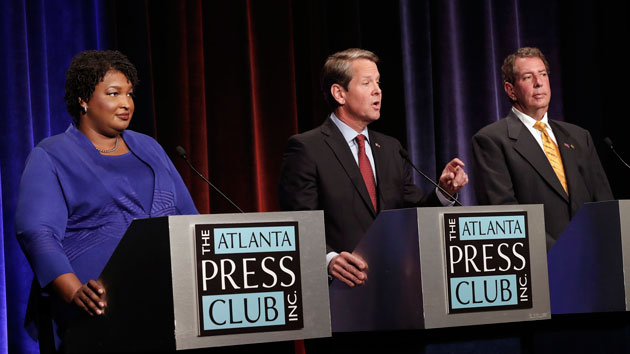 John Bazemore-Pool/Getty Images(ATLANTA) — The two sides of Georgia's heated gubernatorial race appeared on stage together for their first debate Tuesday and familiar themes were on hand for the candidates, except a fire alarm about 5 minutes into the program.
But that was over quickly. The Democratic candidate Stacey Abrams and Republican nominee Brian Kemp (who were joined by Libertarian Ted Metz who sold himself as a protest vote) quickly got to discussing health care, immigration and the fiery allegations against each other.
ABC News broke down the key topics.
The photo of Abrams taking part in a 1992 demonstration burning the old state flag
"I took an action of peaceful protest," Abrams responded to assertions that the act indicates she is "too extreme" to head the state of Georgia. Abrams also accurately pointed out that Brian Kemp voted in 2003 to remove the confederate symbol from the state flag.
When asked if he will step aside as top election official if a recount is needed, Kemp sidesteps
It's certainly possible less than 1 percent will be the separation between Kemp and Abrams come election day, so the moderators asked the current state secretary of state if he will recuse himself from a recount. He did not directly answer the question. "I have always fulfilled and follow the law," Kemp said.

Health Care
Abrams touted what she called a "bipartisan plan" to cover half a million people in the state. She accused Kemp of not supporting pre-existing conditions, which the secretary of state called "absurd" and in turn accused Abrams of wanting single-payer health care.
Immigration
Kemp reiterated his belief that undocumented immigrants should not be eligible for DACA. "I’ve been running my whole campaign on putting Georgians first," Kemp said. "I think we need to continue to do that."
Kemp accused Abrams of encouraging ineligible voters to vote for her
The republican candidate is referring to this video clip from an event earlier this month when Abrams said, among many other groups, undocumented people are part of the "blue wave." Abrams' camp at the time said her comments were taken out of context. Tonight she responded by saying "I have never in my life asked anyone ineligible to vote for me."
"What I’ve asked for is that you allow those that are legally eligible to vote, to allow them to cast their ballots,” she said.
Accusations of voter suppression
Kemp vehemently denied allegations of working to suppress the minority vote, calling the accusations "a farce." Kemp said under his tenure as secretary of state, minority participation is up 23 percent. ABC has not been able to independently verify that.
Abrams accused Kemp of scaring people away from the polls. "Voter suppression isn't only about blocking the vote, it's also about creating an atmosphere of fear, making people worry that their vote won't count."
Copyright © 2018, ABC Radio. All rights reserved.