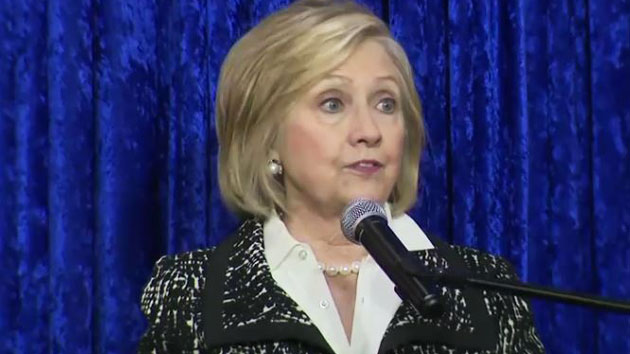 ABCNews.com(NEW YORK) — Former presidential candidate Hillary Clinton reacted to the suspicious package sent to her house in New York Wednesday, thanking the U.S. Secret Service and calling out the environment of "deep divisions" framing the attempts.
"We are fine thanks to the men and women of the Secret Service who intercepted the package addressed to us long before it made our way to our home," Clinton said, speaking at a campaign event in Florida for congressional candidate Donna Shalala, a former Cabinet official under President Bill Clinton.
"Every day we are grateful for their commitment, and obviously never more than today, but it is a troubling time isn't it? And its a time of deep divisions, and we have to do everything we can to bring our country together," Clinton said.
Her daughter, Chelsea Clinton, tweeted her gratitude for the Secret Service earlier Wednesday.
The suspicious packages sent to CNN in New York and the homes of the nation's most powerful Democrats, former President Barack Obama and the Clintons, prompted swift condemnation from the White House and congressional leaders.
The preliminary belief is that all three devices are of similar pipe-bomb-style construction. Suspicious packages were also sent to former Attorney General Eric Holder, New York Gov. Andrew Cuomo's Manhattan office and the building in Sunrise, Florida, where former Democratic National Committee chairperson Rep. Debbie Wasserman Schulz has an office. A pipe bomb was also found earlier this week in the home mailbox of billionaire George Soros, who has a house in a town near the Clintons in New York.
President Donald Trump was briefed on the suspicious packages sent to the Clinton and Obama homes Wednesday morning before other reports surfaced, including that a package was also delivered to CNN. The White House forcefully denounced the "attempted violent attacks."
“We condemn the attempted violent attacks recently made against President Obama, President Clinton, Secretary Clinton, and other public figures," White House press secretary Sarah Sanders said in a statement. "These terrorizing acts are despicable, and anyone responsible will be held accountable to the fullest extent of the law. The United States Secret Service and other law enforcement agencies are investigating and will take all appropriate actions to protect anyone threatened by these cowards.”
Sanders followed up with an update after packages were found at CNN in New York: "This is an ongoing situation that President Trump and his admin are monitoring closely. Our condemnation of these dispicable acts certainly includes threats made to CNN as well as current or former public servants. These cowardly acts are unacceptable and wont be tolerated," she tweeted.
Vice President Mike Pence called the attempts "cowardly" and "despicable." Trump retweeted Pence's statement on Twitter, adding "I agree wholeheartedly!"
Ivanka Trump, the president's daughter and adviser, tweeted that there's "no excuse" for the attempted attacks.
Senate leader Mitch McConnell, calling the deliveries "attempted acts of domestic terrorism," thanked first responders for their protection against "unconscionable acts."
“I stand with all Americans in condemning today’s attempted acts of domestic terrorism. As we continue to learn more, Americans are united in gratitude for the first responders — the Secret Service, the Postal Service, and other law enforcement — who protect our leaders and public figures from such unconscionable acts,” McConnell said in a statement.
House majority leader Paul Ryan also commented, calling the acts "reprehensible."
Later in the afternoon, House minority leader Nancy Pelosi also reacted.
"The goal of terrorists is to instill fear," she said. "We will not allow them to diminish our commitment to building a brighter future for communities across America."
And Sen. Elizabeth Warren, D-Mass., who campaigned with Clinton in 2016, said violence – against people or media organizations – "has no place in our democracy."
Clinton's opponent for the Democratic nomination for president in 2016, Sen. Bernie Sanders of Vermont, called for a battle of "words and ideas, not fists and bombs."
Rep. Eliot Engel, a Democrat who represents parts of the Bronx and Westchester Counties in New York, asked the president for a personal rebuke on the "despicable actions."
Obama, who has been on the campaign trail stumping for Democrats, had no immediate comment through his spokesperson but deferred to the Secret Service for further information.