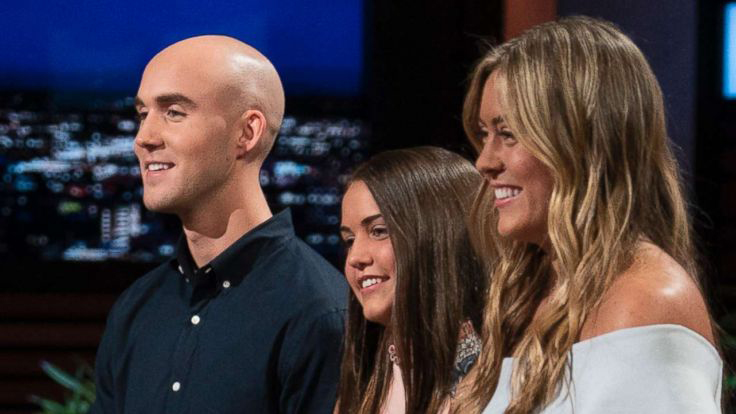 Eric McCandless/ABC(NEW YORK) — It was a pitch no "Shark Tank" fan will ever forget.
After Keith Young — a 9/11 hero and firefighter who helped in the aftermath and cleanup at Ground Zero — died recently from cancer related to that cleanup, his children took it upon themselves to promote and pitch his invention and continue his inspiring legacy.
Kaley, Christian and Keira Young wowed the Sharks and left many in tears with Keith's story and his Cup Board Pro, a wood cutting board with a detachable cup to easily clean up messes like chopped vegetables, which has since sold out after the trio's appearance on the show. The invention spawned from Keith Young's desire to spend less time in the kitchen and more time with his kids.
But for Kaley Young, 25, appearing with her brother and sister on "Shark Tank" and the weight of their father's story is more about fulfilling her idol's dream and sharing him with the world then any sales figures.
"It's kind of crazy," Young told "Good Morning America" about all the pickup Sunday's appearance on the show has gotten for the family and their father's creation.
"I'm just grateful to fulfill my dad's dream and I know he has my mom right by his side."
Before Young, a two-time "Chopped" champion, succumbed to his cancer, Kaley and her siblings also lost their mother Beth to breast cancer more than five years ago.
In addition to furthering their father's legacy, Kaley has also sought to honor her mother's legacy, running and teaching at the pilates studio her mother founded, Hot Pilates Secret.
As inspirational as Kaley and the rest of the Young kids have been for millions who saw them on Sunday's show, she says her father was that same role model for them. The three children played Young's audition tape he made for "Shark Tank" before his passing, which left Daymond John and Lori Greiner in tears.
"He would be dancing and having the biggest party now," she said of how Keith would react to all this success. "He was the greatest dad any child could ask for. Just the way he lived his life, I know he'd be really excited about this."
But no matter how big the Cup Board Pro company gets, Kaley said her father paved the way for them to handle it with grace and class.
"He was also very humble, he wouldn't let it change who he was," she said.
At the end of Sunday's show, all five Sharks invested to try and take this special chopping board, which helps for easy cleanup, to as many households around the country as possible.
Kaley says her family is working with the investors to produce more boards, which have since sold out with thousands of orders rushing in after Sunday.
"The site just went viral and crazy, which is insane," she said. "We are in talks now, trying to figure out the best direction to take it."
There's still more to come from the Youngs.
In addition to the pilates studio and Cup Board Pro, the Youngs have set up a GoFundMe to support the FDNY Foundation, further promoting their father's rich history and legacy and "to give back as our way of saying thank you."
"I always dream pretty big, because if your dreams don't scare you, they're not big enough," she said. "I just want to live my life with meaning and purpose, and share my mom and my dad with the world."