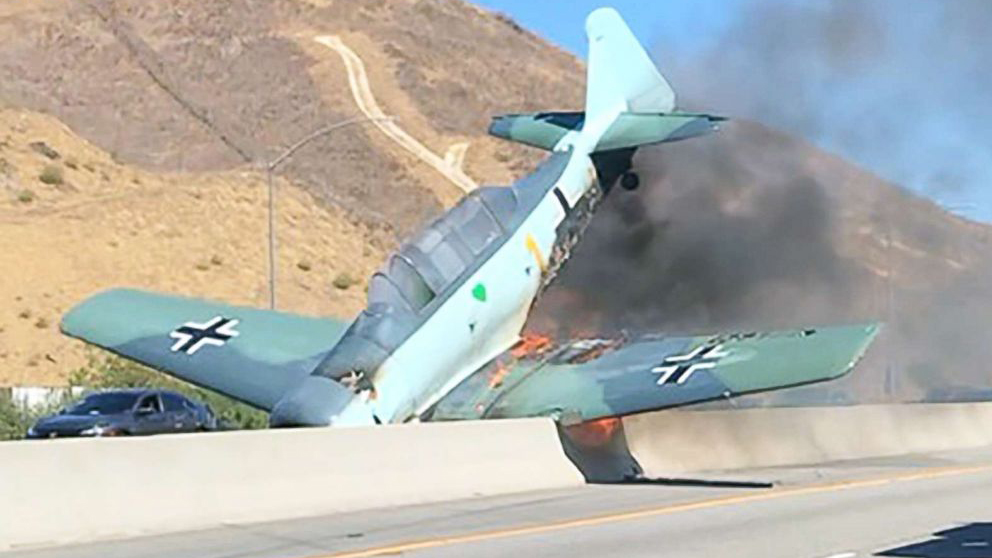 Obtained by ABC News(LOS ANGELES) — A small, vintage plane crashed on a busy freeway in Southern California Tuesday, causing traffic to be backed up for miles.
The fiery crash was reported shortly before 2 p.m. in the westbound lanes of the 101 Freeway. The aircraft came to rest against the center divider of the freeway, ABC News owned station KABC-TV reported.
Los Angeles County firefighters managed to pull the pilot out of the aircraft before it erupted in flames. No other passengers were traveling on board the aircraft.
No vehicles were involved in the crash and no injuries were reported, authorities said.
The burning wreckage prompted officials to shut down both sides of the freeway, which will remain closed until further notice.
The aircraft — a North American SNJ-5 — is owned by Condor Squadron Officer's and Airmen's Association, according to the FAA.
KABC-TV spoke with the pilot, who only identified himself as Rob. He explained that the plane engine failed.
"I picked a spot on the freeway, where I knew there was a big section of cars that weren't there, but the engine completely failed," Rob told KABC-TV. "Fortunately, I was able to not hurt anybody – other than the airplane."
The cause of the crash remains under investigation by the NTSB and the FAA.