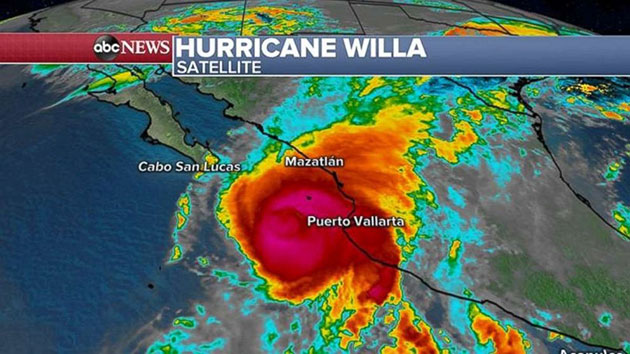 ABC News(NEW YORK) — Hurricane Willa, now a powerful Category 3 storm, has made landfall in Mexico with winds of 120 mph.
The hurricane made landfall near Isla Del Bosque, Sinaloa, which is about 10 miles south of Escuinapa, according to the National Hurricane Center.
A weather station near Marismas Nacionales recently reported a wind gust of up to 95 mph.
Willa was about 70 miles south of Mazatlán, Mexico, Tuesday afternoon and is forecast to make landfall later in the day.
As the storm made landfall, strong winds and dangerous storm surge are expected along Mexico's southwest coast.
Flooding is also a major concern. Some coastal areas of mainland Mexico could see up to 18 inches of rain.
Inland regions can expect up to five inches of rain in some areas.
Willa is forecast to rapidly weaken as it reaches the San Madre Occidental mountain range.
At the same time, the storm will be intercepted by a shortwave trough, and as a result, it will gain speed as it travels northeast toward Texas.
The remnants of Willa are expected to combine with moisture from the Gulf of Mexico, which could mean major rainfall in Texas and Louisiana.
Some areas of western Louisiana and eastern Texas could see over 3 inches of rain through Friday.