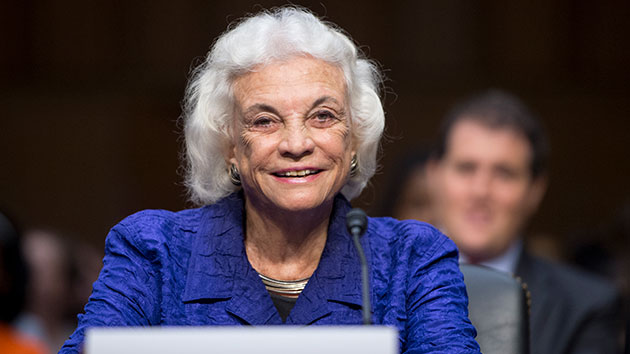 Bill Clark/Getty Images(WASHINGTON) — Retired Supreme Court Justice Sandra Day O'Connor, the first woman ever to serve on the highest court in the land, has been diagnosed with dementia and is battling the early stages of what is probably Alzheimer's disease, she announced in a public letter addressed to "friends and fellow Americans" on Tuesday.
O'Connor retired from the Supreme Court in 2006 to take care of her husband, John, who also suffered from Alzheimer's. She was nominated to the court by President Ronald Reagan in 1981 when she was 51 years old.
"Some time ago, doctors diagnosed me with the beginning stages of dementia, probably Alzheimer's disease," O'Connor wrote, explaining that the condition has progressed to the point that she can no longer participate in public life. "Since many people have asked about my current status and activities, I want to be open about these changes, and while I am still able, share some personal thoughts," she wrote.
The former justice, who loved telling stories about growing up on the Lazy B Ranch in southwest Arizona before attending Stanford University and eventually settling in Phoenix, plans to remain there for the time being. Before serving on the U.S. Supreme Court, she spent over a decade in public office in Arizona, eventually serving as the GOP majority leader in the state Senate, the first woman to do so anywhere in the country, and then serving on the Arizona Supreme Court of Appeals.
"I will continue living in Phoenix, Arizona, surrounded by dear friends and family," O'Connor wrote. "While the final chapter of my life with dementia may be trying, nothing has diminished my gratitude and deep appreciation for the countless blessings in my life."
One of the most noteworthy cases to come before O'Connor on the Supreme Court was Mississippi University for Women v. Hogan, a 1982 decision concerning a man who sued Mississippi University's all-female nursing school after he was denied admission. The court decided that was a violation of the Constitution's Equal Protection Clause. O'Connor, who wrote the majority opinion, argued that not only was determining acceptance on the basis of sex wrong, but that nursing shouldn't be only a woman's job.
O'Connor wrote that "excluding males from admission to the School of Nursing tends to perpetuate the stereotyped view of nursing as an exclusively women's job." The policy, therefore, "lends credibility to the old view that women, not men, should become nurses, and makes the assumption that nursing is a field for women a self-fulfilling prophecy."
Over the course of her two decades on the court, O'Connor was seen as an unpredictable vote, according to Cornell University's law project Oyez. She was the swing vote in reaffirming Roe v. Wade in 1992, which stemmed from the abortion rights case Planned Parenthood v. Casey.
But O'Connor's overriding legacy was as a trailblazer for women. She acknowledged her glass-ceiling achievement in her letter Tuesday.
"I hope that I have inspired young people about civic engagement and helped pave the pathway for women who may have faced obstacles pursuing their careers," she wrote. "As a young cowgirl from the Arizona desert, I never could have imagined that one day I would become the first woman justice on the U.S. Supreme Court."
Though it would be 12 years before she was joined on the bench by Justice Ruth Bader Ginsburg, Justices Sonia Sotomayor and Elena Kagan eventually brought the number of women to have served on the court to four. She also inspired women to jump into the world of law. According to the Sandra Day O'Connor Institute, 36 percent of law school students were women when she was appointed to the court. By the time she retired in 2006, that number stood at 48 percent.
O'Connor spoke of the increased presence of women on the bench in 2010 at an annual Women's Conference.
"I've got to tell you, I went to the Supreme Court recently … I sat in on an argument, and I looked up at the bench on which I sat for 25 years, and what did I see?" O'Connor said. "I saw on the far right, a woman. On the far left side, a woman. And here in the middle, a woman. And it was dazzling."
"Do you really think at the Supreme Court, where reason prevails, that women bring something unique?" ABC News' Diane Sawyer, the conference moderator, asked.
"Well, I think in most hard legal issues, a wise old woman and a wise old man are going to reach the same conclusion," O'Connor said at the 2010 event. "But there are cases where our experience as women might bring some perspective to the situation before the court."
In response to the news of O'Connor's diagnosis, Elizabeth Wydra, the president of the Constitutional Accountability Center, hailed O'Connor's "pathbreaking service."
"Justice O’Connor has led by example, with the power of a stateswoman and accomplished jurist, showing me and millions of other women and men how to comport ourselves in our chosen profession, and how to respect the institutions of American government handed down to us by our forebears through more than two hundred years of sacrifice and struggle," she said in a statement.
Since retiring from the court 12 years ago, O'Connor's primary goal has been promoting civic engagement – advocating for Americans to "understand our Constitution and unique system of government, and participate actively in their communities."
In her letter Tuesday, she spoke of the program she started, iCivics, which provides free online resources teachers can use in social studies and history classes across the country.
"I can no longer help lead this cause, due to my physical condition. It is time for new leaders to make civic learning and civic engagement a reality for all," she wrote in her letter.Copyright © 2018, ABC Radio. All rights reserved.