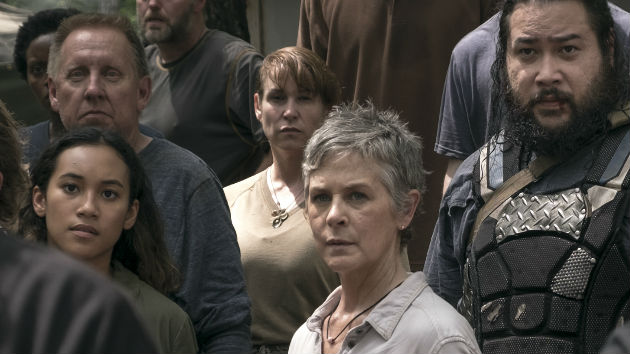 At Alexandria, Rick is up and at 'em early. He walks outside to find a perfectly ripe tomato. He leaves it near Carl's grave. He convinces Michonne to take a break from making a charter, and approaches her about having a baby together.

Meanwhile, Maggie and one of her Hilltoppers go to Alexandria, and run into group of Saviors, including Jed, a troublemaker, who explains — while stealing one of their tomatoes — that Saviors have gone missing. Regina, one of Negan's former Lieutenants, diffuses the situation.

At Alexandria, Michonne, Rick, and Judith have a family fun day, set to music.
One of the Saviors briefs Michonne on the missing Saviors situation and the fact that Justin's dead.

Just then, we cut to a Savior camp, there are fisticuffs underway over the fate of their missing men. Fr. Gabriel tries to break it up, as does Rosita, but it only stops when Carol draws down on Jed, who punched former Savior Alden for playing peacemaker with the other groups, as he always does.

Rick's Survivors draw down on the Saviors and a stand-off takes place. They blame "garbage lady," or Anne — formerly Jadis — for taking out the Saviors. Daryl is also suspected.

Rick rides in and breaks up the scrum.

He questions Gabriel about Anne; Maggie denies the Saviors any guns, which is what they want for protection from the snatchers.

Father Gabriel gently questions Anne — but notes he hadn't spend the whole night with her, like he told Rick he did. She ignores his questions.

Separately, Rick questions Daryl about Justin, saying his wound is consistent with a crossbow bolt. He denies he did anything. "If I'da killed him, I'da killed him in plain sight," Daryl says plainly.

Maggie is paired off with former Oceansider Cyndie and they find a boarded house around which walkers are congregated.

Cyndie gets tripped up, and things look dire. Just then, a bolt from the blue; it's Daryl. Rick is seconds behind.

They realize they're missing one of their groups. They find one of that group, Bea from Oceanside; she's been knocked out. She comes to, and explains she was ambushed with former Savior Arat, who has apparently been captured.

Rick tries convincing Carol to keep the course with the peacemaking. "It's us or the dead. And every life counts now."

Elsewhere, Daryl questions Maggie, asking her if she's happy with the kumbaya. She has her doubts, but explains, "What Rick's doing is right for the future."
We're back at the Scavengers' abandoned compound. Their former leader Anne digs, finding a box and a firearm and a walkie.

She uses it to hail whoever had the helocopter in episodes past. The voice on the other line is looking for an "A."

Father Gabriel catches her; she explains she's been trading people for supplies and other things. She asks him to leave with her. "You can't tell anyone. But if you agree…we can have a life like you can't imagine.

"And all this time, I thought you were a 'B' she tells him, and pistol whips him, knocking Gabriel out.

Elsewhere, Jed shambles as if he's a walker. Carol approaches, and she's taken from behind by another Savior. Jed isn't a walker; it was a trap. He snatches her gun and takes her knife. Rick appears, and there's a standoff. Jed tells him to lay down his gun or he'll slash Carol's throat.

He also says they're going to leave the bridge project. They only want some guns for protection on the way home.

With Jed still hiding behind Carol, she opens a hidden knife. Rick pretends he's going to hand over his gun, and Carol spins, stabbing Jed in the chest. Rick re-draws on the Saviors.

Elsewhere, Daryl and Maggie come across a would-be execution in progress. It's Arat, the latest missing Savior. Cyndie from Oceanside and Bea, the one who claimed to have been knocked out earlier, have Arat on her knees; harpoon at the back of her head.

"She killed my husband," Bea says flatly. Remember, the Saviors killed all the Oceanside men.

Daryl puts his crossbow down. "She has a reason," he says.

Cyndie says, "She's the last one. After this, it's over."

"You hung Gregory," Cyndie says. "You showed us the way."

"You did this because of me?!" Maggie says.

"She shot my brother right here," Cyndie pleads. "You were smiling."

Arat begs Maggie and Daryl for her life.

"What did you say?" Maggie asks.

Maggie and Daryl turn their backs and walk away.

The next morning, the Saviors walk out of Rick's work camp.

Daryl and Maggie walk home. Cyndie says I showed her the way," Maggie says. "She did the same thing for me. We gave Rick's way a chance," Maggie tells Daryl. "It's time to see Negan."

The Walking Dead returns next Sunday, October 28 at 9 p.m. on AMC