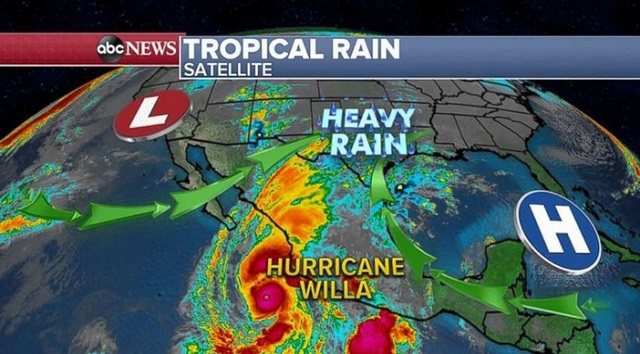 ABC News(HOUSTON) — The hurricane season in the eastern Pacific Ocean officially is the most active since 1971.
Hurricane Willa, now a Category 4 with winds reaching 155 mph this morning, is nearly a Category 5, which has winds of at least 157 mph.
Major resorts in Mexico are under a tropical storm warning, although it appears the worst of the hurricane might miss major resort areas including Mazatlan and Puerto Vallarta.
The hurricane is expected to hit Mexico's Pacific coast as at least a Category 3, potentially creating life-threatening storm surge and flash floods farther inland. Some regions could see up to 2 feet of rain.
The storm is expected to weaken after passing over the Sierra Madre mountains, after which the remnants of Willa likely will bring significant rainfall to Texas.
Some portions of southern and central Texas could see as much as 4 inches of rain this week. Heavy rain also is possible in Louisiana and Mississippi.