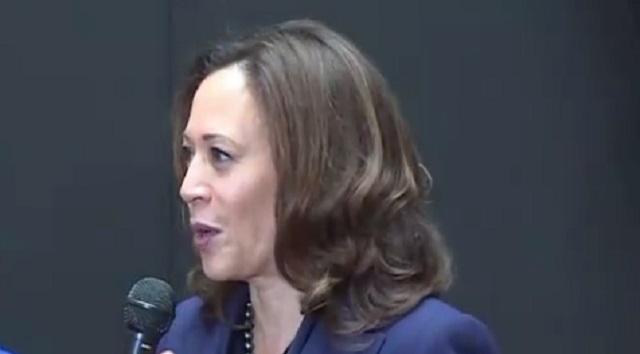 ABC News(DES MOINES, Iowa) — California Sen. Kamala Harris, a potential contender for the Democratic presidential nomination in 2020, began a two-day campaign swing across the state of Iowa in the town of Ankeny Monday morning, her first major visit to the state that will hold the first-in-the-nation caucuses in just over 16 months.
Harris is set to campaign in the central and eastern parts of the state, including stops in Des Moines, Cedar Falls, Iowa City and Cedar Rapids, hoping to boost the Democratic nominee in Iowa's 3rd Congressional District, Cindy Axne, and the Democratic nominee for Iowa Secretary of State Deidre DeJear.
This is Harris' first visit to the state since 2008, when she campaigned for then-Sen. Barack Obama during her time as the District Attorney of San Francisco.
"There is so much on the line this year," Harris said in a statement released by the Iowa Democratic Party last week, "We have seen how Republicans sow the seeds of hate and division throughout our country over the last two years."
"Now it’s time to hold them accountable, at every level of government, and Iowans know that better than anyone. I’m excited to be coming to Iowa to make sure everyone uses the most powerful tool we can as Americans, our votes, to make real change in Iowa and in our country."
Harris, first elected to the U.S. Senate in 2016 after serving as California's Attorney General for six years, has been a prominent and fierce critic of the Trump administration during her time on Capitol Hill. She has clashed with numerous administration officials like Attorney General Jeff Sessions, and recently called the confirmation hearings of then-Judge Brett Kavanaugh to the U.S. Supreme court a "sham and disgrace."
"When we wake up in the middle of the night with that thought that has been weighing on us, sometimes we wake up in a cold sweat,” Harris said at a dinner hosted by the Ohio Democratic Party in Columbus earlier this month, "Well, for the vast majority of Americans, when we wake up thinking that thought, it is never through the lens of the party for which we are registered to vote."
Aside from her high-profile role as Trump administration antagonist, Harris also recently rolled out a new tax proposal called the “LIFT Act," which aims to help U.S. families earning less than $100,000 year become eligible for a monthly tax credit of up to $500, or $6,000 a year.
While Harris has begun to make a name for herself on Capitol Hill as a forceful progressive advocate, the Democrat is still not widely known to much of the American electorate.
A recent poll from CNN had Harris polling at 9 percent, third in a field of potential Democratic 2020 contenders that included former Vice President Joe Biden, and Vermont Sen. Bernie Sanders, who campaigned across Iowa this past weekend.