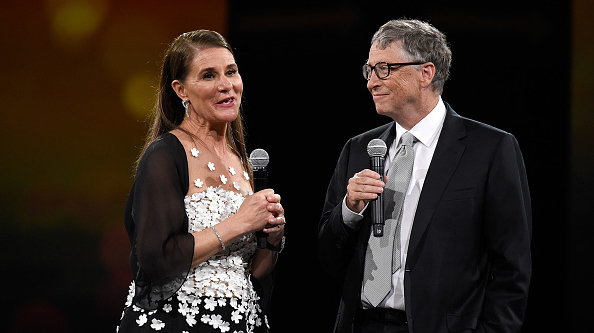 Kevin Mazur/Getty Images for Robin Hood(NEW YORK) — Throughout her life and career, Melinda Gates has strived to be a voice for marginalized people around the world, working to the bridge the gap of inequality, especially for women. For her it is a responsibility that comes with being Melinda Gates.
"I think you grow into a name over time. It's taken me quite some time honestly." Gates tells ABC News’ Chief Business, Technology and Economics correspondent, Rebecca Jarvis on an episode of the "No Limits with Rebecca Jarvis" podcast.
"I'm in this position by luck. No other reason. I fell in love with Bill [Gates]. He fell in love with me. We decided to get married … if you're in this position you have to do something for the women that you've met."
Gates began her career at Microsoft in 1987 and worked her way up to become the General Manager of Information Products where she eventually managed a team of almost 2,000 people. It’s there that she met her future husband, Microsoft co-founder Bill Gates, and the two were wed in 1994. When she decided to leave the workforce she says her husband was shocked.
"I actually shocked him when I told him I was going to leave. I had already made that decision and he was completely shocked because he knew how much I loved my career," Gates said.
Despite leaving Microsoft, Gates always knew she would eventually go back into the workforce in some capacity and she says it was her husband who actually gave her the push to go back "maybe even sooner" than she would have.
Today she is the co-chair of the Bill and Melinda Gates Foundation, which is one of the largest private foundations in the United States working to reduce inequality around the world. But it is her passion for helping women that led to the creation of Pivotal Ventures, an investment and incubation company she founded three years ago to focus on women’s equality issues in the United States and to increase the number of women in the technology sector.
"I would often be flying home from these trips in the developing world thinking about equality and realizing we don't actually have equality for women anywhere yet in the world," she said.
Last year all-female led startups only received about 2.2% of the total $85 billion invested by venture capitalists, according to PitchBook. And for women of color that number drops to about 1%. Through Pivotal Ventures, Gates is hoping to raise that percentage by investing in VC’s who are increasingly supporting female and minority entrepreneurs such as AllRaise, Aspect Ventures and the Female Founders Fund.
Gates said that the low percentage says more about the investors than the founders.
"I have met women — so many women who feel that they are voiceless; they're voiceless in their communities, sometimes in their families, they certainly are voiceless on the global stage, she said. "And so I just have decided that at some point I would have to step into this name and into this role and give them a voice."
"That's what I do almost no matter what room I walk into these days," Gates added.
Hear more from Melinda Gates on episode #106 of the "No Limits with Rebecca Jarvis" podcast.