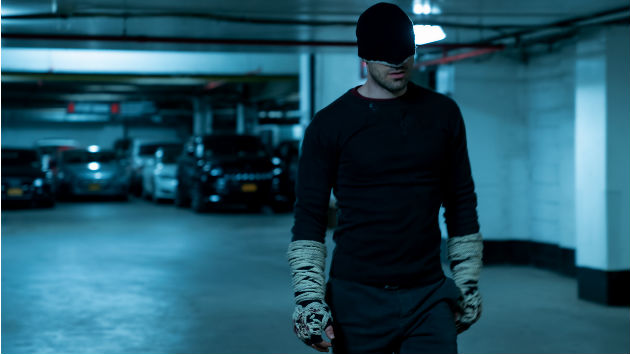 David Lee/Netflix(NEW YORK) — Maybe you've already binged it, but if not, the new season of Marvel's Daredevil just hit Netflix on Friday.

The show picks up where Marvel's The Defenders left off: Blind lawyer-turned-superhero Matt Murdock, aka Daredevil, is being nursed back to health in a convent after being buried underneath the rubble of an exploded building.

Murdock's in a tough spot: Not only does everyone think he's dead, but the woman he loves, Elektra, has disappeared. Charlie Cox, who plays Murdock/Daredevil, tells ABC Radio of his character, "He’s a pretty broken man. He’s lost Elektra. He’s kind of re-found her, then lost her again. And a building has fallen on him. He’s broken physically, mentally, spiritually and emotionally."

"And the most troubling thing is that he’s questioning everything in terms of who he is, what he does, his faith, his relationship to God and the church," Cox continues. "And what that does…is make him very reckless."

Meanwhile, Murdock's two best friends — his former law partner Foggy Nelson and his former secretary-turned-reporter Karen Page — believe he's dead. They're also busy trying to take down notorious criminal Wilson Fisk, aka The Kingpin, who's been released from jail and is now under FBI protection.

Deborah Ann Woll, who plays Karen, says her character's job this season is to do what every good journalist does and "chase down that truth." Foggy, meanwhile, decides to run for District Attorney.

And this season introduces a new character, Agent Benjamin Poindexter, who'll eventually become one of Daredevil's greatest enemies: Bullseye. But the key word here is "eventually."

According to Wilson Bethel, who plays Poindexter, this season, his character is just, as he puts it, "a very disturbed man struggling with some major, major internal issues."

“Desperately juvenile” — Charlie Sheen looks back 10 years after his infamous “Tiger Blood” meltdown
Asian man stabbed in back in Chinatown, suspect charged with attempted murder as a hate crime
Asian man stabbed in back in New York City’s Chinatown, suspect arrested
Secretary of State making his first ‘trips’ to Mexico and Canada — virtually
Scoreboard roundup — 2/25/21
Teyonah Parris says becoming Marvel’s Monica Rambeau has been her “most physical role to date”