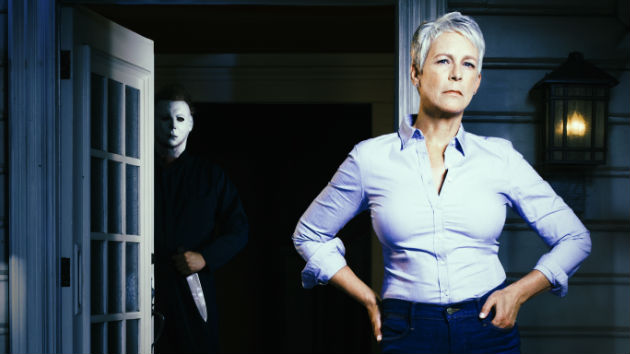 The film, featuring Jamie Lee Curtis reprising her role as Laurie Strode — also recorded the second best October opening ever — behind Venom, with $80 million — and could surpass it when the final numbers are in. Halloween also posted the second largest opening for an R-rated horror film trailing last year's It, which opened with $123.4 million. Internationally, Halloween nabbed $14.4 million.

A Star Is Born held on to second place for the third straight week since its release, pulling in an estimated $22.8 million. It earned and additional $22.8 million overseas, pushing it past the $200 million mark worldwide.

Venom, in its third week of release, fell to third place after topping the box office for the past two weeks. The sci-fi action thriller earned an estimated $18.1 million. The film continued its domination overseas though, grabbing an estimated $32.3 million.

Mid90s, written by Jonah Hill and marking his directorial debut, delivered an estimated $249,500 from just four locations, for a hefty $62,375 per-theater average. It expands nationwide next weekend.

Can You Ever Forgive Me, starring Melissa McCarthy in her first dramatic role, posted an impressive debut, earning $150,000 from five theaters.