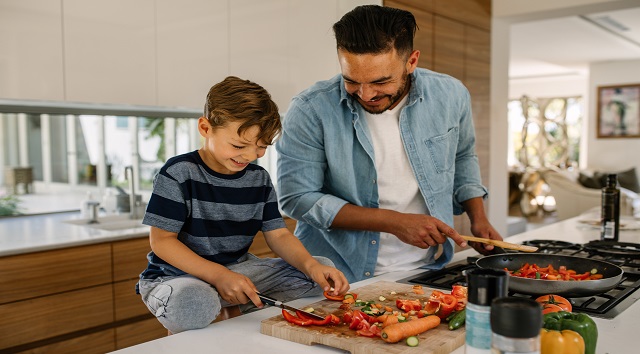 (NEW YORK) — Here's another reason for wannabe dads to exercise: Sweating it out now might pay off later in better health for your children, according to a new study.
Men who exercise before the conception of their children might be able to pass on to their kids a predisposition for a healthier metabolism, even if the father typically consumes a mostly high-fat diet, according to the research, published in the journal Diabetes.
But there's one catch to the promising findings: The study was conducted on mice.
A growing body of evidence shows that a father's health may also play an important role in their offspring's health. So researchers at The Ohio State University Wexner Medical Center looked at how diet and exercise affected the offspring of male mice.
The researchers found that mice given high-fat diets that didn't exercise had offspring that, at 52 weeks old, were more likely to have higher levels of body fat and problems processing glucose in the blood.
This combination of increased body fat and glucose problems can lead to developing type 2 diabetes.
But exercise negated that effect, Kristin Stanford, lead study author and a physiology and cell biology researcher at the Medical Center, said in a press release.
"When the dad exercised, even on a high-fat diet, we saw improved metabolic health in their adult offspring," she added.
Looking deeper, the researchers found that these changes occurred at the genetic level.
Obesity is believed to cause genetic changes in men's sperm, which can then be passed onto the offspring. These changes include a lower sperm count, sperm motility — their ability to move — and testosterone levels.
But for the mice that exercised, the researchers found genetic changes that actually protected the offspring from the poor diet.
So, if lifestyle changes could positively impact your children before you had them, would you be more motivated to work out and eat right?
"There's potential for this to translate to humans. We know that in adult men, obesity impairs testosterone levels, sperm number and motility, and it decreases the number of live births," Stanford said.
"If we ask someone who's getting ready to have a child to exercise moderately, even for a month before conception, that could have a strong effect on the health of their sperm and the long-term metabolic health of their children,” she added.
That said, more research needs to be done in this area. For now, it's good to keep in mind that your decisions about your health today might affect your children's health tomorrow.
Copyright © 2018, ABC Radio. All rights reserved.