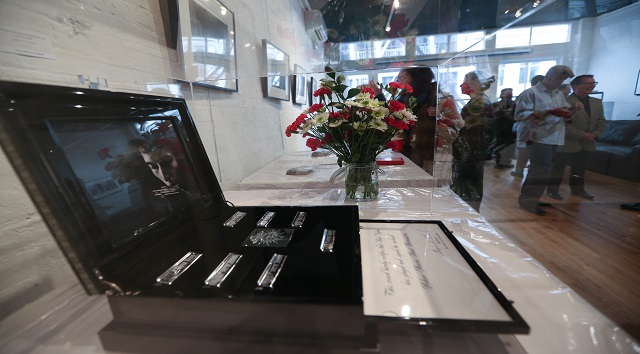 Rob Kim/Getty Images(LONDON) — A new Bob Dylan exhibit has opened in London and features handwritten copies of some of his most famous songs.
Included in the Mondo Scripto exhibit, which opened in Halcyon Gallery on Oct. 9, are "The Times They Are A-Changin'" and "Knockin' on Heaven’s Door." Each song is accompanied by a drawing from the singer-songwriter.
“Mondo Scripto is a historical first,” Paul Green, president and owner of Halcyon Gallery, told ABC News. “It is the first time ever that Dylan has actually rewritten any of his lyrics.”
Some of the lyrics, however, have drastically changed. In "Tangled up in Blue," the lyrics were rewritten for the exhibit.
“When he is sitting down, obviously it’s not 1962, it’s not 1970, it’s a different era, and he’s thinking again about the words and what they mean to him now and the drawings that are associated with them,” Green said.

Mondo Scripto also features Dylan’s sculptures, which were made in his studio in California. The exhibit, which will be in London through November, is set to travel to China and Japan in 2019 before eventually making its way to the U.S.