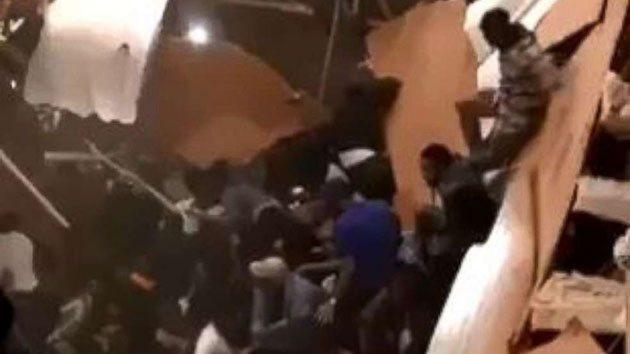 Twitter/@StevieW21(CLEMSON, S.C.) — Dozens of people were injured early Sunday when a floor collapsed during a party at an apartment building near Clemson University in South Carolina.
Thirty people were taken to three area hospitals with injuries, according to police.
The collapse happened on the first floor of a building at The Woodlands of Clemson, a neighborhood a few minutes from campus, just before 12:30 a.m. The center of the floor at a clubhouse collapsed into the basement, police said.
The clubhouse had been leased for a private party. Videos shot at the scene showed a large party with people jumping around and dancing when the floor suddenly gave out from under them.
"By the time I had put one foot out the door, I felt that something was weird and that's when everyone just collapsed and the guy behind me disappeared," Raven Guerra, 20, told Good Morning America. "Everyone was on the floor and people were screaming, and there was wood sticking up from the floorboards."
Guerra added, "Turning around and seeing a bunch of people who used to be on the second floor now on the basement was really surreal, and people were crying. It was a lot to take in."
Everyone was able to be extricated from the building and no one was trapped, according to officials.
None of the injuries appeared to be life-threatening, Clemson Police Department said.
Clemson University was celebrating homecoming this weekend and had won a crucial college football game over fellow ranked opponent North Carolina State, 41-7, on Saturday afternoon.
Police said an investigation into the incident was ongoing.

Lawyer for family of girl injured in pre-Super Bowl crash speaks out: ABC News exclusive
3 cops injured in possible explosion after being called to search vacant home: Police
College dropout donates $20 million to the historically Black university he couldn’t afford 60 years ago
Tiger Woods injured in car crash
3 dead, 2 injured after shooting inside Louisiana gun store, officials say
Details on many crashes on icy I-80, no update on medical conditions