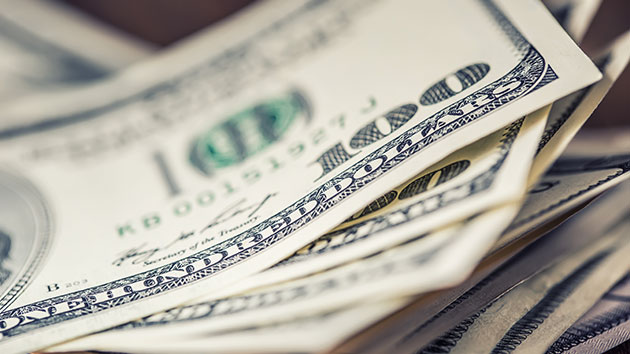 iStock/Thinkstock(NEW YORK) — The day after nobody won a $1 billion Mega Millions jackpot, the numbers were drawn for a relatively paltry Powerball prize of $470 million. But, like Mega Millions, no one took home the Powerball, and the pot continues to rise.
The winning numbers for Saturday's drawing were 16, 54, 57, 62, 69 with a Powerball of 23.
With no one claiming the big prize, the Powerball drawing on Wednesday — one day after a $1.6 billion Mega Millions drawing — will be $620 million. The cash payout is approximately $354.3 million. The Powerball is the third-largest in the game's history and sixth-largest in U.S. lotto history.
There were a number of runner-up prizes. There were $2 million winners in Florida and Tennessee, and $1 million winners in Arizona, Connecticut, Indiana, Michigan, Missouri, New Jersey and Washington.
The first five balls were drawn from a pool of 69 and the Powerball from a pool of 26, making the odds of getting all six numbers correct 292,201,338 to 1, according to the Powerball website.
A single winning ticket on Saturday would have been eligible for a cash payout of $268.6 million.
Combined with a new Mega Millions jackpot of $1.6 billion, there is more than $2 billion in top-prize money between the two lottery games — and millions more available for subordinate prizes.
The Mega Millions top prize of $1.6 billion has a cash payout option of $904 million, but both can grow depending upon the volume of ticket sales.
Copyright © 2018, ABC Radio. All rights reserved.