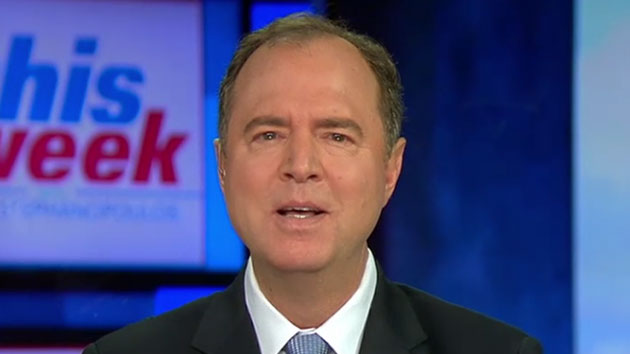 ABC News(WASHINGTON) — The top Democrat on the House Intelligence Committee said he expects President Trump to ultimately accept Saudi Arabia's denials of the crown prince's involvement in the death of journalist Jamal Khashoggi.
Rep. Adam Schiff, D-Calif., told ABC News Chief Anchor George Stephanopoulos on This Week Sunday, "I think we can see where this is headed. Ultimately, the president is going to accept the crown prince’s denials, but it's hard for me to imagine that these orders would have been carried out without the knowledge of" Saudi Crown Prince Mohammed bin Salman.
"I think this ought to be a relationship-altering event for the U.S. and Saudi Arabia," Schiff added.
Both Schiff and a fellow committee member — Congressman Peter King, R-N.Y., who also appeared on This Week — said the Saudis' latest explanation that Khashoggi died in a fight at the country's consulate in Istanbul early this month was not believable.
“I can tell you I don't find this Saudi account credible at all,” Schiff said. “There's simply no way they dispatched a team this large and that Khashoggi engaged in some kind of a brawl with them unless he was merely fighting for his life.”
“They could have brought him down in a matter of seconds without causing any physical harm at all,” King added. “So obviously there was an intent, I believe, to kill him.”
The two congressmen also agreed that the U.S. should take action against Saudi Arabia in response to Khashoggi's death.
“Let me make it clear: I think the Saudis are the most amoral government that we've ever had to deal with," King said. “What Saudi Arabia did was savage, was evil” and needs “to be condemned.”
Khashoggi, a Saudi journalist who was critical of the country's current government, has not been seen since entering the Saudi consulate in Istanbul on Oct. 2.
Saudi Arabia initially contended he had left the consulate the same day, but its government changed its story on Friday and said Khashoggi, who has been living in the U.S. and serving as a columnist for The Washington Post, was killed in the consulate after an argument led to a fistfight. The Saudis also said Khashoggi was interested in returning to Saudi Arabia, something his close friends have denied.
Five top Saudi government officials have been fired and 18 Saudi citizens detained in connection to Khashoggi’s murder, according to the country’s state-run news agency.

Khashoggi’s editor at The Washington Post said on This Week that she believes that the Saudi response is an effort to cover up what happened rather than to shed light on the incident.
“I still believe, and the Post as an institution still believes, that this is not an explanation; this is an attempt at a cover-up," said Washington Post Global Opinions Editor Karen Attiah. "So much doesn't add up for me personally, who knew Jamal, worked with Jamal over the last year.”
She said key elements of the Saudi story, including that Khashoggi wanted to return to Saudi Arabia and engaged in a brawl at the consulate run, counter to everything she knew about him.
“This idea that he wanted to return to Saudi Arabia is absolutely untrue. There is a reason why he came to Washington and felt free in Washington,” Attiah said. “This idea that a brawl, you know, this man who is kind and calm and gentle, that any sort of brawl took place that was equal — if anything, if we're going to give any sort of credence to this, he walked into an ambush that was set up for him.”
On Saturday, President Trump, in a phone interview with the Post, criticized the Saudi government’s explanation of Khashoggi’s death, telling the paper, “Obviously there’s been deception, and there’s been lies.”
While the president cast doubt on the country’s changing narrative surrounding the columnist’s death, he also told the Post that Saudi Arabia is an “incredible ally” and was undecided on whether the crown prince had a role in Khashoggi’s killing, saying, “Nobody has told me he’s responsible. Nobody has told me he’s not responsible."
Schiff told Stephanopoulos on Sunday, “We're never going to know exactly what took place in terms of the crown prince's marching orders for this group unless we get a confession from the crown prince, which is not going to happen."
Schiff added that he believes the Trump family implicitly sent a message to the Saudi royal family prior to Khashoggi's killing that it could act with impunity.
“I think part of why we are where we are is that we have essentially delivered a message through the Trump family that it's carte blanche for the Saudi family. They can do what they want, where they want — and the U.S. will never stand up to them," Schiff said. "That kind of a policy has got to come to an end."
Copyright © 2018, ABC Radio. All rights reserved.