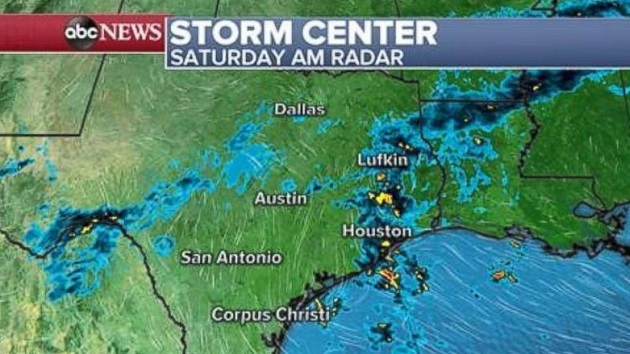 ABC News(NEW YORK) — Another blast of cold air is in the forecast for the eastern half of the nation — and this blast is a little stronger than the wave of cold that hit much of the central and eastern U.S. earlier this week.
Wind chills will be in the 20s across parts of the Midwest on Sunday, and wind chills in the 30s are possible for major cities in the Northeast.
On Monday, the cold air really grips the eastern U.S., with wind chills in the 20s across much of the Northeast and low 30s from New York City to Washington, D.C.
The cold air reaches even farther south, with wind chills in the low 40s all the way to Georgia and South Carolina. Even coastal regions — such as Wilmington, North Carolina, which was hit by Hurricane Florence just a little over a month ago — will see wind chill temperatures below 40.
More rain in Texas
After several rounds of drenching rain in Texas this week, showers are expected to become less widespread through the weekend in much of Texas. The rounds of heavy rain have left the ground saturated, and some rivers and lakes in the area are in flood stage.
The Colorado River at Lake Travis, near Austin, Texas, is still well into major flood stage. At about 704 feet, the gauge is within a Top 5 crest in history, and it is at its highest point since 1997 when the gauge was at more than 705 feet.
The lake will rise several more feet on Saturday, and officials are considering opening more flood gates on the Mansfield Dam on Lake Travis, according to Austin ABC affiliate KVUE-TV. The opening of additional flood gates would cause problems for homeowners downstream in the region.
Showers stretch from Texas into the Northeast on Saturday morning. Most of the rain is being caused by moisture interacting with a strong cold front moving through the central U.S.
No additional widespread flash flooding is expected with these rain showers.
Along Texas' Gulf Coast, moisture is interacting with a stationary front and causing locally enhanced downpours along the immediate coastline.
Most of hard-hit areas in Texas will not see additional rain over the weekend. However, parts of the Gulf Coast — especially extreme southern Texas, near Brownsville and Corpus Christi — will see enhanced rainfall that could cause flash flooding. Localized rainfall totals of over 4 inches are possible.
After a brief break from the drenching rain, some of the heavier rainfall may make its way further into hard-hit central Texas by Monday. Another shot of locally heavy rain is possible for much of Texas and parts of the Southern Plains by Wednesday. Through the upcoming work week, rainfall totals over 2 inches will be possible in parts of Texas.
Unfortunately, this could aggravate any ongoing flooding in Texas that has not had the time to recede.
Copyright © 2018, ABC Radio. All rights reserved.