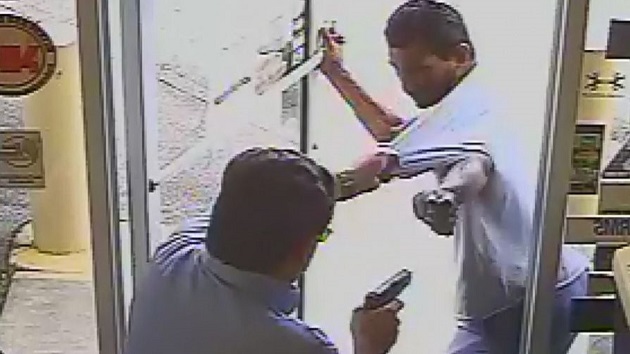 Lakeland Police Department(LAKELAND, Fla.) — The Florida city commissioner who confronted and shot an alleged shoplifter at a military surplus store earlier this month was charged with murder on Friday.
Michael Dunn, who serves as Lakeland's city commissioner for the Southwest District, was confronting a man police said had taken a hatchet from the store he owns when he shot and killed him. Surveillance footage from the incident, which took place Oct. 3, was released on Monday.
Christobal Lopez, 50, was killed in the shooting.
Dunn was charged with second-degree murder on Friday. If convicted, he could spend up to life in prison.
The 47-year-old Dunn had claimed he acted in self-defense, knowing the man was in possession of a hatchet, and cited the state's "stand your ground" law. The state attorney for Florida's 10th Judicial Circuit said otherwise.
"I have determined that this case and the actions of Mr. Dunn fall outside the protection of the 'stand your ground' law," Polk State Attorney Brian Haas said at a news conference Friday night.
According to an affidavit and the store surveillance footage, Dunn left his office at the Vets Army Navy Surplus store when he saw Lopez take a hatchet from a shelf and stick it in the waistband of his pants. Dunn grabbed a handgun, stuck it in his waistband and cut off Lopez from leaving the store. The two got into an argument, according to the affidavit, before the hatchet fell out of Lopez's pant leg and onto the floor.
Lopez said he would pay for the hatchet and moved back to the counter, before "hastily attempting to leave the business with the hatchet in hand," according to the affidavit. Dunn is seen grabbing Lopez's shirt to prevent him from leaving. He then loses his grip on the shirt and raised his gun to "eye level" and fired two shots.
One shot struck Lopez in the left upper torso and another hit him in his back, according to the affidavit. He died on the scene. Dunn did not attempt to "render aid to the victim," the affidavit says.
The affidavit also includes statements to police from Dunn after being read his Miranda rights: "The suspect stated he was in fear, but when he was asked what would have happened if he let go of the victim, the suspect replied, 'It might be fair to say that if I just stepped back and let somebody come in and take what they want, that there would be no issue."
Rusty Franklin, Dunn's lawyer, told ABC News on Monday — prior to his client's arrest — that "all legal defenses are under analysis and will be pursued."
Franklin later said at a press conference Monday that Dunn "acted responsibly and legally."
Dunn is currently being held in Polk County Jail, and an arraignment date has yet to be set.
The charge is the second example in three months in the state in which a prosecutor did not accept a "stand your ground" defense. Michael Drejka was charged with manslaughter after shooting a man outside a Clearwater convenience store in August. Security footage in that incident showed Markeis McGlockton pushing Drejka to the ground after he confronted his fiancé outside the gas station. Drejka shot and killed McGlockton.
Florida's "stand your ground" law came to national prominence in 2012 with the acquittal of George Zimmerman for the fatal shooting of Trayvon Martin in Sanford, Florida. The law says a person "does not have a duty to retreat and has the right to stand his or her ground if the person using or threatening to use the deadly force is not engaged in a criminal activity and is in a place where he or she has a right to be."
Copyright © 2018, ABC Radio. All rights reserved.