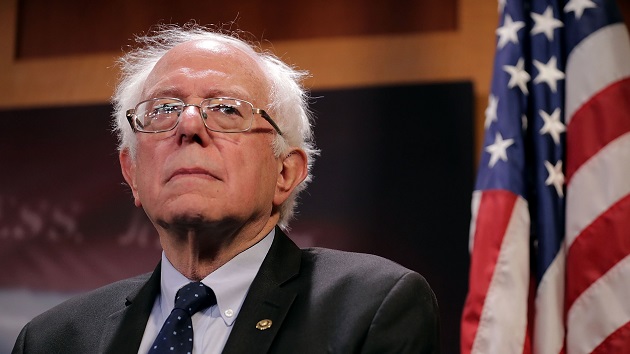 Chip Somodevilla/Getty Images(WASHINGTON) — As part of an aggressive campaign swing in the final weeks of the 2018 midterms, Sen. Bernie Sanders will return to the state of Iowa this weekend, looking to boost a Democratic congressional hopeful that is trying to flip the state's most conservative district to blue.
Sanders will campaign on Saturday and Sunday with J.D. Scholten, the Democratic candidate in Iowa's 4th Congressional District against GOP Rep. Steve King, a conservative provocateur and fervent supporter of President Trump known for his hard-line rhetoric and positions on immigration.
The district is the most Republican in the state, according to statistics from the Iowa secretary of state. And despite his penchant for generating controversy, King has only failed to win 60 percent or more of the vote in his district during his nearly 16-year congressional career.
Then-candidate Donald Trump won the district by more than 27 points in the 2016 election, but Scholten, a first-time candidate and former professional baseball player, has significantly out-fundraised King in the final stretch of the campaign, hauling in more than four times the $151,673 King raised in the third quarter of 2018, according to Federal Election Commission reports.
FiveThirtyEight rates the race as "Likely Republican," giving King a seven-in-eight chance to win re-election.
The swing begins in the far western part of the state with a rally in Sioux City, with additional events planned in Fort Dodge and Ames, including a Social Security town hall and an appearance at the Iowa State University homecoming parade, according to Scholten's campaign.
King once again sparked outrage this week by praising a candidate for Toronto mayor, Faith Goldy, who appeared on a podcast produced by a Neo-Nazi website during last year's white nationalist rally in Charlottesville, Virginia.
Scholten condemned King's support for Goldy, writing on Twitter, "Once again, Steve King spends more time supporting far-right leaders in other countries than he does focusing on the needs of the people of our district."
The Des Moines Register, Iowa's largest newspaper, endorsed Scholten in his challenge to King last week, sharply criticizing the Republican incumbent.
"This one’s a no-brainer for any Iowan who has cringed at eight-term incumbent King’s increasing obsession with being a cultural provocateur," the Register's editorial board wrote, "In his almost 16 years in Congress, King has passed exactly one bill as primary sponsor, redesignating a post office. He won’t debate his opponent and rarely holds public town halls. Instead, he spends his time meeting with fascist leaders in Europe and retweeting neo-Nazis."
GovTrack, a site that tracks the activities of the U.S. Congress, confirms that King has indeed only been the primary sponsor of exactly one piece of legislation: H.R. 2758, which redesignated a post office in Glenwood, Iowa, as the "William J. Scherle Post Office Building."
Sanders' swing sparks 2020 speculation
The trip for Sanders is part of an aggressive, nine-state campaign blitz that the Vermont senator's team announced last week and began on Friday with a campaign rally in Bloomington, Indiana, for congressional candidate Liz Watson.
"It is a diversity of Democrats on the list from some people who are unabashedly progressive to some who are progressive but not totally aligned with Bernie on every issue," Jeff Weaver, Sanders' former presidential campaign manager and current adviser, told ABC News in a phone interview last week.
Sanders is also campaigning in South Carolina on Saturday, and has stops planned in Wisconsin, Arizona, Colorado, Nevada and California in the coming weeks, as speculation that he could be mounting another presidential bid in 2020 continues.
But Sanders is not the only 2020 Democratic contender visiting Iowa in the coming days.
California Sen. Kamala Harris is making her first trip to the Hawkeye State early next week, where she will rally with congressional candidate Cindy Axne in the state's 3rd Congressional District and other Democratic hopefuls during her two-day swing.
Harris is set to campaign in the central and eastern parts of the state, including stops in Des Moines, Cedar Falls, Iowa City and Cedar Rapids.
“There is so much on the line this year,” Harris said in a statement released by the Iowa Democratic Party this week. "We have seen how Republicans sow the seeds of hate and division throughout our country over the last two years."
"Now it’s time to hold them accountable, at every level of government — and Iowans know that better than anyone. I’m excited to be coming to Iowa to make sure everyone uses the most powerful tool we can as Americans — our votes — to make real change in Iowa and in our country."
Copyright © 2018, ABC Radio. All rights reserved.