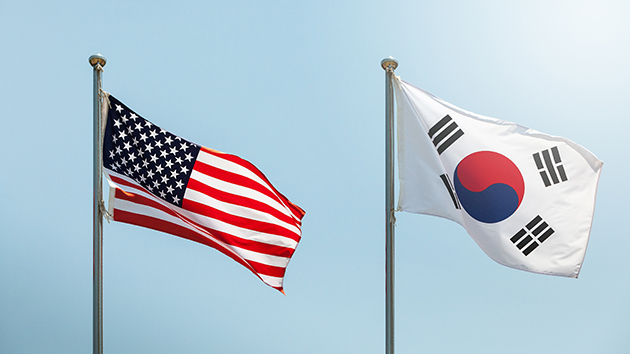 ByoungJoo/iStock/Thinkstock(WASHINGTON) — The United States and South Korea said Friday they have decided to suspend another joint military exercise to give more breathing room for ongoing denuclearization talks with North Korea.
The Pentagon announced Defense Secretary James Mattis and South Korean Defense Minister Jeong Kyeong-doo had agreed to put off this year's version of Vigilant Ace, a large-scale air exercise slated for December.
"Secretary of Defense James N. Mattis and Minister of National Defense Jeong Kyeong-doo decided to suspend Exercise VIGILANT ACE to give the diplomatic process every opportunity to continue," said Dana White, the chief Pentagon spokesperson.
"Both ministers are committed to modifying training exercises to ensure the readiness of our forces," she added.
Both Mattis and Jeong had met earlier Friday in Singapore on the sidelines of the ASEAN security meeting.
Last year's version of the annual Vigilant Air exercise included the participation of 230 aircraft and more than 12,000 personnel. Some of the United States Air Force's most sophisticated aircraft participated in the exercise, including the F-22 and F-35 stealth fighters.
Occurring just days after North Korea's successful test of an intercontinental ballistic missile (ICBM) capable of reaching the east coast of the United States, North Korea blasted the exercise as being a provocation.
The suspension of this year's Vigilant Air exercise marks the second time that the U.S. and South Korea have agreed to put off an annual large-scale military exercise in the wake of the Trump-Kim summit in Singapore this past June.
Trump's pledge to stop 'war games' with South Korea throws critical exercises into question
A month after that summit, the United States and South Korea announced they would suspend the large Ulchi Freedom Guardian exercise scheduled for August.
Mattis has said the "good faith effort" of suspending that exercise was not open-ended and that he wanted to wait and see how future negotiations with North Korea progress before making a decision about future large-scale exercises, particularly the Foal Eagle exercise scheduled for the spring.
In September, Mattis said there had suspension of previous exercises had had a "negligible" effect on the readiness of U.S. troops stationed in South Korea.
White said on Friday that Mattis and Jeong "pledged to maintain close coordination and evaluate future exercises."
Mattis consulted Japanese Defense Minister Takeshi Iwaya ahead of the joint U.S. and South Korean announcement. White said "they reaffirmed their commitment to regional security."