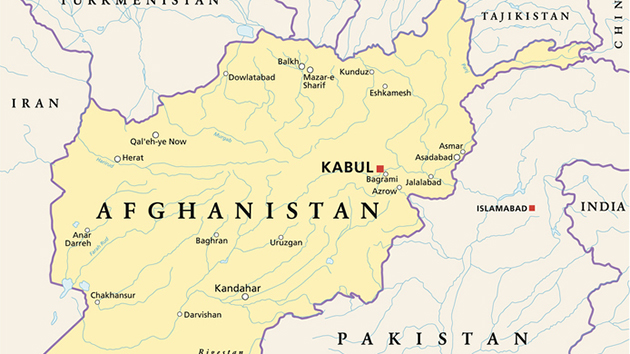 PeterHermesFurian/iStock/Thinkstock(KANDAHAR, Afghanistan) — New details show how close the top U.S. general in Afghanistan was to Thursday's violent insider attack in Kandahar that killed two senior Afghan security officials and wounded the province's governor. Gen. Austin Scott Miller told Friday he believes the attacker was targeting the Afghan officials and expressed confidence that despite the attack Afghan forces will be able to ensure security for key parliamentary elections on Saturday.
The attack killed Gen. Abdul Raziq, the well-known police chief in Kandahar, and Gen. Abdul Mohmin, the top intelligence official in the province. Kandahar's governor Zalmai Wessa was wounded along with three others, including an American service member and an American civilian employee.
On Friday, Miller told the Tolo News Agency that he believes that "what happened in Kandahar was an attack on the security forces."
“My assessment is that I was not the target," Miller said. "It was a very close confined space. But I don’t assess that I was the target.”
The attack occurred shortly after Miller had participated in a meeting with the top civilian and military officials in Kandahar in southern Afghanistan.
The American general and the Afghan officials had moved to an area outside of the governor's residence to await the arrival of the military helicopter that would transport Miller and his staff, according to Col. Dave Butler, a spokesman for Resolute Support, the NATO training mission in Afghanistan.
The group was talking among themselves waiting for Miller's helicopter when, Butler said, a gunman wearing some type of Afghan security uniform opened fire on them with an automatic weapon.
Butler stressed that Miller was not in the shooter’s line of fire and was firing at the Afghan officials.
The gunman was shot immediately. “It was over in seconds,” said Butler.
Miller, like the other U.S. personnel around him, pulled out his handgun, which is standard practice in such a situation.
"When there’s a threat, we will draw our weapons,” said Butler. “That’s what we’re trained to do and Gen. Miller is no exception.”
What followed was a combination of U.S. and Afghan forces securing the area and tending to the wounded.
Miller had some of the wounded transported aboard his helicopter so they could quickly receive medical treatment.
On Friday, in a hospital bedside interview with Afghan reporters Wessa said his health was improving and described the attack as an act of terror.
The attack led to a one-week postponement of parliamentary elections in Kandahar that were scheduled for Saturday.
A day after the attack in Kandahar, Miller was seen on the streets of Kabul greeting Afghan security personnel ahead of Saturday's key parliamentary elections.
Butler said Miller's visit with Afghan forces was intended "to provide some confidence to the Afghan people and security forces.”
Miller expressed confidence that with U.S. and NATO support Afghan security forces will do a good job of providing security for Saturday's election in the rest of the country.
"We will continue our support. My message to the people of Afghanistan has been very consistent: you have every right to be proud of your security forces and the preparations that made for this election despite this unfortunate event, tragic event down in Kandahar,” he said.
Copyright © 2018, ABC Radio. All rights reserved.