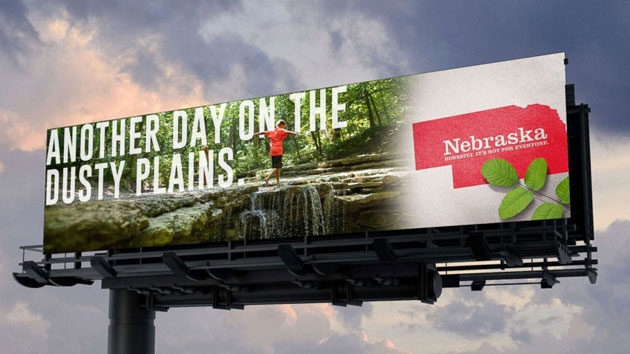 Nebraska Tourism Commission"You can't change perceptions just by providing information, so we had to be disruptive in some way," Ricks said of the sarcastic ads.
One print ad points out "there's nothing to do here" as a group floats down a river in a livestock tank, or what Nebraskans refer to as "tanking."

Nebraska Tourism CommissionNebraska is trying to lure tourists who are interested in an "unpretentious and uncomplicated" vacation, and as the campaign's tagline notes: "Honestly, it's not for everyone."
"We're not looking for everybody," Ricks said on "Start Here." "This place isn't for everybody, as any state isn't for anybody."
The #HonestlyNE campaign will launch in out-of-state markets beginning in spring 2019.
Copyright © 2018, ABC Radio. All rights reserved.

350-pound crocodile undergoes major surgery to remove tourist’s shoe from stomach
Biden takes COVID-19 relief pitch on the road to Michigan
Poet Amanda Gorman on her inauguration invite: I was ‘honestly shocked’
Biden to pitch an eight-year pathway to citizenship in day one immigration reform bill
Anna Kendrick, Rebel Wilson and rest of the ‘Pitch Perfect’ cast reunite for COVID-19 charity single
Coronavirus relief negotiators set deadline for a deal by week’s end as Dems add $300B for schools to their pitch