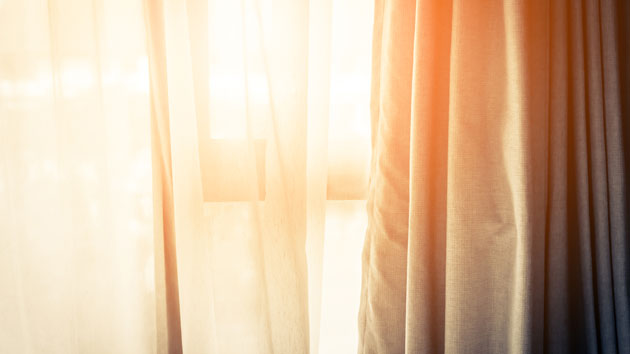 (NEW YORK) — Opening the window shades in the morning may not only help the growth of indoor plants or get skin a little dose of vitamin D — it might also lower amounts of living bacteria that thrive in the dark.
An abundance of sunlight was significantly associated with lower amounts of a certain types of bacteria, a new study in the Journal of the Microbiome said.
The mix of bacteria that exists in a space or in a living being is called its microbiome. In dark rooms, about 12 percent of bacteria, on average, were able to reproduce, the researchers at the University of Oregon found. But in sunlight, only 6.8 percent thrived. That was down to 6.1 percent for bacteria exposed to UV light.
"When designing buildings, we should take into account and understand how the microbiome may be selected, based on the design," Dr. Ashkaan Fahimipour, a post-doctoral researcher in biology and built environment at the University of Oregon said in an interview with ABC News. "This could actually have an impact on health."
Sunlight is a central component of architectural design, long considered a way to fight off the spread of pathogens. Exposure to light at specific wavelengths can inactivate many microorganisms and reduce microbial dust communities.
In this study, the researchers constructed eleven identical climate-control miniature rooms, mimicking real buildings, and added dust collected from residential homes. They then applied three different glazing treatment to each window so that either visible sunlight, UV light or no light would pass through the windows.
After 90 days, the research team collected dust from each tiny house and analyzed the abundance and viability of the bacteria. A very different, smaller community of bacteria existed with more light exposure.
Fahimipour says that just as certain weeds are more likely to grow on a front lawn than in a rainforest, the diversity of microorganisms is tremendously different in varied environments.
This study can help inform building designs in the future, to make sure there's a mix in their microbiomes.
The study does not specify which bacteria may lead to negative health outcomes; the point is that light creates a wide and different type of microbiome, while decreasing certain type of bacteria observed in dark settings.
There were some limitations to the study, however. Differences in architectural and geographical features — the very things that can produce lower or higher amounts of light and may affect some of the results in different types of buildings — weren’t taken into account, since they used a standard design.
They also did not address the amount of available water, or how a more condensed environment can lead to some bacteria being pre-selected.
Old folk wisdom says that daylight disinfects, but what the study did not address was what other factors might be involved, and how this shift in dust microbiome could affect different settings like hospitals or nursing homes.
Of course, microorganisms are everywhere and most of the time, they pose no harm. But it is time to begin to understand how choices in building design can affect some bacteria — and how controlling for the growth of bacteria might improve health — whether that's in the living room or the hospital room.