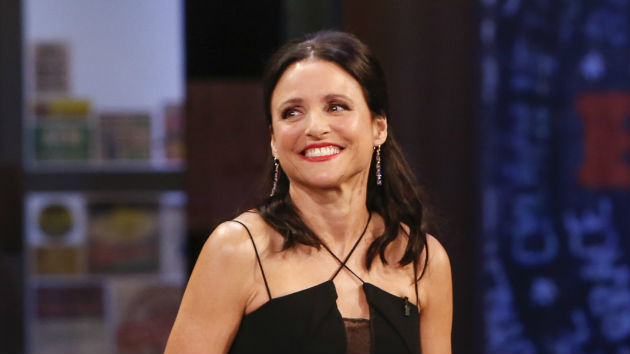 The Seinfeld vet and Veep star came loaded for bear: "I'm really good, I'm not just saying that," she said to cheers, before saying with a laugh, "Let's get this cancer sh** out of the way, bring on the questions."

"Did you beat the breast cancer?" Kimmel asked, to which Louis-Dreyfus answered enthusiastically, "Yes!"

The actress' announcement that she had the disease stunned her fans, who followed her battle with cancer via social media. She explained how she came to be so public about her fight.

"Well, I did it for a couple of reasons. First and foremost, we had to stall Veep production because of my situation — a lot of people work for me, and I knew I couldn't really keep it private — because I had to tell everybody what was going on. And then I just sort of embraced that, and I got a lot of positive feedback. I think people liked having the fact that I had a sense of humor about it. And also I think it's an important conversation to have about health and health care."

As she's done in the past, Louis-Dreyfus tied her fight against cancer with the fight for health insurance for all — which dovetailed into Kimmel's very public battle over health care when his newborn son needed heart surgery.

Louis-Dreyfus also admitted to being nervous about giving a speech after she receives the Mark Twain Prize for American Humor this weekend. "They're giving you an award for being comedic, and now they're saying, at the same time, now prove that you deserve it with this speech…"