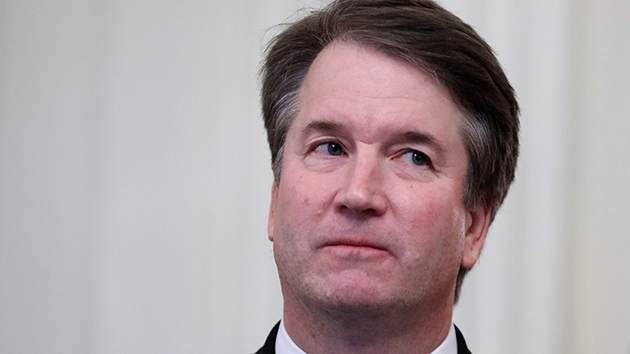 Photo by Chip Somodevilla/Getty Images(SMITHTOWN, N.Y.) — Federal authorities have arrested a New York man for allegedly threatening to attack two U.S. senators over their support for Brett Kavanaugh, whose nomination to the Supreme Court was almost derailed by an allegation he sexually assaulted a woman three decades ago while they were in high school.
74-year-old Ronald Derisi of Smithtown, Long Island, was arrested Friday morning on charges of threatening a federal official, according to court records.
Prosecutors allege that on the same day Kavanaugh and his accuser testified in separate sessions to a Senate panel, Derisi left two threatening voicemails at offices associated with a lawmaker only identified in charging documents as "Senator 1."
In one of the messages, he allegedly expressed his opposition to Kavanaugh and said he had a "present" for the senator: "It's a nine millimeter."
Then, after the U.S. Senate voted along largely along partisan lines to confirm Kavanaugh, Derisi left 10 voicemails for a second unidentified senator.
"Maybe you should go back to [your home state],” he allegedly said in a message on Oct. 7. “We'll be in touch soon, see ya soon, see ya soon."
The investigation was led by the U.S. Capitol Police.
“Representative democracy cannot work if elected officials are threatened with death for simply doing their job,” the U.S. Attorney for the Eastern District of New York, Richard Donoghue, said in a statement. “The First Amendment – the pinnacle of American achievement – protects debate, disagreement and dissent, not death threats.”
According to U.S. Capitol Police, Derisi was previously arrested for leaving threatening voicemails at an unidentified victim’s home and office three years ago. He pleaded guilty to local charges in the case.
Friday's development comes after a threatening letter that the writer claimed was contaminated with ricin was sent to the Bangor, Maine, residence of GOP Sen. Susan Collins early Monday afternoon, the senator's communications director, Annie Clark said. Collins' husband reportedly later said the letter mentioned her vote in favor of Kavanaugh.
Copyright © 2018, ABC Radio. All rights reserved.