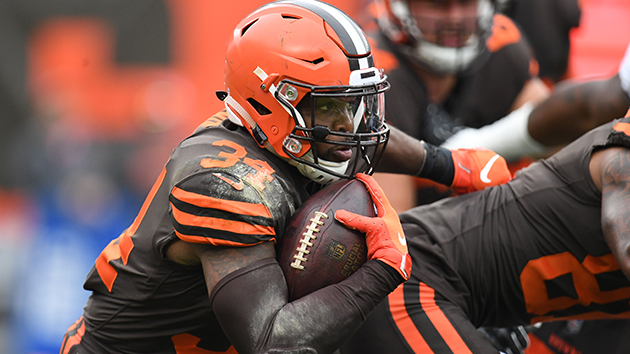 Photo by Jason Miller/Getty Images(NEW YORK) — The Cleveland Browns are trading running back Carlos Hyde to the Jacksonville Jaguars, a source tells ESPN's Adam Schefter.
Hyde has rushed for 382 yards and five touchdown through Cleveland's first six games. He will now help fill a hole for a Jacksonville team that has been without its star running back Leonard Fournette for much of the season.
Fournette has already been ruled out for Sunday's game against the Houston Texans. It will be the third consecutive game Fournette will not play.
The move will give Browns rookie running back Nick Chubb more opportunities to show his talent. Chubb has tallied 173 yards and two touchdowns on just 16 carries this season.
Copyright © 2018, ABC Radio. All rights reserved.